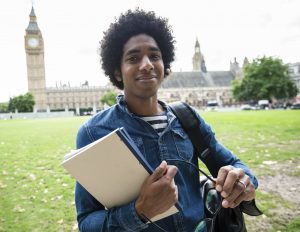 Rising college costs are on the minds of many parents these days, and no wonder, especially with student financial aid not managing to keep up.

My daughter graduated from college in 2015, and my independent son is a full-time student pretty well ensconced in his city (read: low tuition) school. Otherwise, I’d be urging both of them to consider going to school overseas. The lower cost would be a significant reason why.

Schools outside of the U.S.Â tend to cost much less, and some programs are taught in English (though attending college in a foreign language is possible and may even be desirable). If you’re interested in higher education overseas, check out Beyond the States, which promotes college education abroad for a host of reasons, cost being just one of them (though it is its No. 1 reason). Beyond the States focuses on programs taught in English.

In a recent AOL article, the attractiveness of lower costs in the UK is made explicit, and Americans are catching on. According to the article, tuition for a non-European student attending a British university ranges from 7,000 to 25,000 pounds (roughly $8,600 to $31,000).

The number of American applicants to British schools has risen by more than 7% over the past five years, according to the British Council, AOL says. For the year 2015—2016, nearly 4,000 American students applied to attend a British university.

Before you rush out and apply for a passport, however, make sure of the reasons you’re going abroad. Cost is a driver for many families and students considering the overseas option, but you’ll want to beware of hidden costs–particularly those incurred traveling back to the States!

Another significant consideration: What financial aid or scholarships are available to you in schools that are stateside? Just be sure to think through the total cost of college, not just the first year. Of course, some overseas schools are free or very low cost.

Be aware, too, that many American schools front load their aid and scholarships. That’s one reason why Ronald Nelson, the young man who was admitted to all eight Ivy League colleges plus several other name schools, turned them all down: He got a four-year free ride to the University of Alabama, enabling him and his family to save so they can later help foot the bill for Nelson’s medical school costsÂ (unless he opts to go to med school for free).

For more, go to AOL.