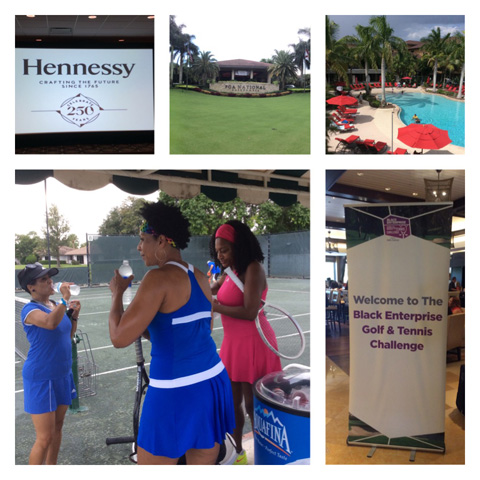 Today was as steady and vibrant as one would expect when stepping into sunny South Florida. Tournament Golf was the first activity of the day and it went off without a hitch. As it was just Day 1 and people were still arriving, the number of people at the event grew steadily throughout the day. You can imagine the joyful clusters of new and old friends uniting for a familiar weekend of relaxation, competition, camaraderie, networking and fun.

The day progressed and the attendees took part in their desired sessions. BlackEnterprise.com stopped by Tennis Conditioning where excitable tennis players warmed up and began practicing their swings. “Forehand! Backhand!” the instructors called out, and the participants followed with rhythmic ease. Though theÂ Tennis Conditioning session consisted primarily of warmups and practice drills, the pace of the session could make yourÂ  head spin. Balls were flying and being quickly swatted back, tennis shoes were scuffing, sweat was dripping, and laughter was in the air. BlackEnterprise.com was able to glean a few tennis tips for those of you who couldn’t be with us this year:

And that they did. But the weather in South Florida can be tempermental in September, and when the Tennis Conditioning participants were well into their groove, a strike of lightning cut the clinic short.

But aÂ  shortened clinic meant more time at the AT&T Social Lounge! The lounge provided recharging stations and allowed everyone to stay connected to their email and social media. AT&T presented its Business Circle and Website Solutions for small and medium-sized business owners who are interested in expanding their business, generating more sales, or reaching more customers. The Website Solutions also offer a helping hand for those looking to build a website themselves, or those who may need AT&T’s assistance in doing so. In addition to learning how to grow a business with the help of AT&T, the sponsor also raffled off the trendy FitBit. To learn more about AT&T Website Solutions, visit webhosting.att.com/score. To hear more about making connections and finding answers to help you build your business, visit BizCircle.att.com.

The day ended with an eye-opening documentary about the long relationship Hennessy has had with African American culture, An Unexpected History: The Story of Hennessy and African Americans, hosted by Moet Hennessy. Throughout the documentary, attendees learned a few interesting facts:

These facts brought full circle the affinity many Africans Americans have had with Hennessy for quite some time. Learning that the brand had such a rich legacy with black culture was even more reason to love it and served as the perfect transition into Thursday night!