'Good Times' Movie in the Works 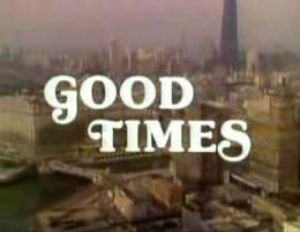 Expected to feature storylines about the Civil Rights movement, a ”Good Times’ feature film is in production by Sony Pictures, Deadline reports.

Originally aired on CBS from February 8, 1974, until August 1, 1979, Good Times was a sitcom about the Evans family, an African-American working class family living in the housing projects on the south side of Chicago.

The film, to be produced by Scott Rudin whose credits include The Social Network, has its critics who think it will ruin memories of the beloved television series.

Michael Arceneaux at Ebony.com thinks the movie will be a “hot mess.”

He writes: “I can see it now, NeNe Leakes will be cast as Wilona Woods after Tyler Perry demands he get to play Florida Evans; Cedric The Entertainer will play Bookman; The Real Housewives of Atlanta’s Porsha Stewart will play Thelma since she looks like her twin from the future anyway; QuvenzhanÃ© Wallis will star as little Penny. Actually…no she won’t. She’s above this foolishness. I’m claiming that for her.”

Would you go see a movie adaptation of Good Times?