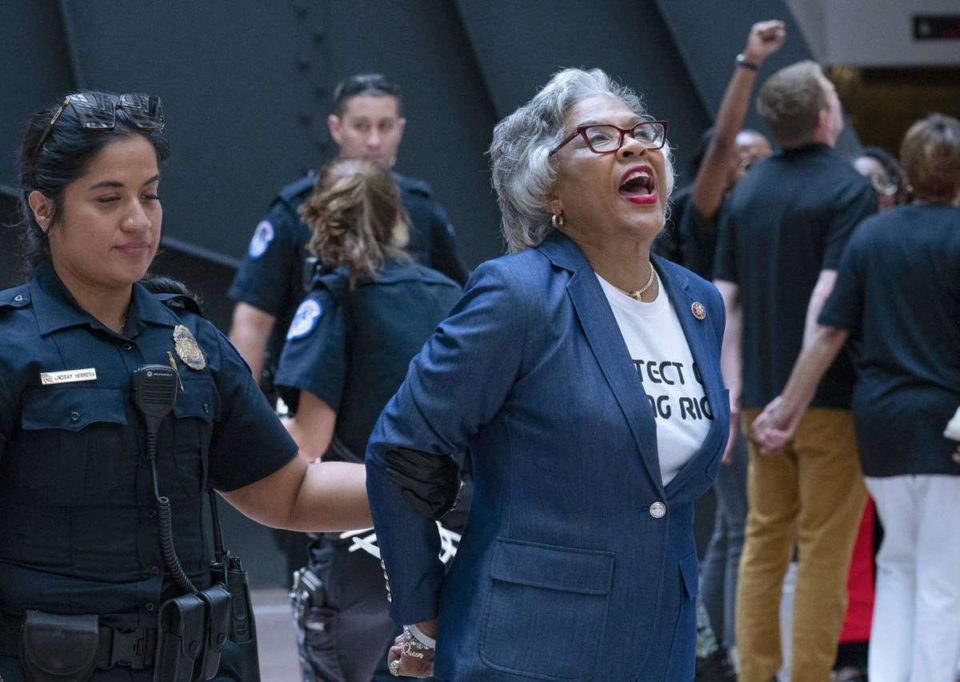 Congresswoman Beatty, who has served Ohio since 2013, and her group were protesting to urge Congress to pass H.R. 1, the For the People Act, which would stop Republican-led states from passing restrictive voting laws and gerrymandering.

The group stood in the lobby locked together, chanting “end the filibuster.”

Several minutes later, Beatty was handcuffed By Capitol Police and led off. Beatty said she was hoping to get arrested. Capitol Police said in a statement to The Hill, two men and seven women were arrested for the protest.

The fight for voting rights began after the 2020 Presidential Election. Former President Donald Trump, who desperately tried to hold on to power, made and repeated baseless lies and brought more than 50 lawsuits against the results. All but one of the lawsuits were dismissed or tossed.

Since then, Republican-led states have passed a slew of restrictive voting laws limiting drop ballots, absentee ballots, mail-in voting, and even limiting food and beverages for those waiting in line to vote. Additionally, a recent ruling by the conservative Supreme Court has weakened the Voting Rights Act of 1965.

After she was arrested, Beatty released a statement saying she stands “in solidarity with Black women and allies across the country in defense of our constitutional right to vote. We have come too far and fought too hard to see everything systematically dismantled and restricted by those who wish to silence us. Be assured that this is just the beginning.”

Black Americans have literally died for the right to vote and will not be willing to give them up easily. Last week, President Joe Biden met with civil rights leaders and organizations who have become increasingly frustrated with his lack of progress on voting rights and police reform, two promises Black Americans largely supported Biden and Vice President Kamala Harris on.