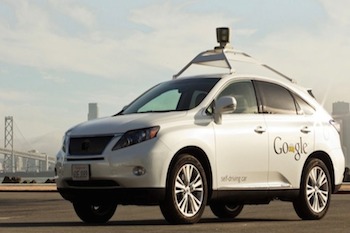 Search engine juggernaut Google is hoping to alleviate the issue drivers feel when they’re brought to a standstill in traffic.

News has hit the wire that Google (GOOGL) has made advancements with its development of the autonomous car. Its goal is to make being delayed by traffic jams a thing of the past. The driverless automobile can transport two passengers around at speeds of up to 25 mph with the computer controlling the steering wheel and brakes.

Such news had made techies and businessmen wonder aloud about just when this technology will be available for mass consumption.

Peter Fuss, a German-based automotive specialist from the EY consultancy, says, “Yes.” Speaking at the Automotive News Congress in Brussels, Belgium, Fuss announced that the autonomous driving ability will arrive in less than 10 years after being spurred on by safety and comfort benefits.

With detractors arguing that it is still a long way off (10 to 15 years more likely), Volvo was one of the staunchest supporters in favor of refining the ability before taking it to mass market.

To break it down even further, Google’s computerized self-driving car comes without a steering wheel, break or accelerator, just buttons to start, pull-over, stop and a computer screen to show the route. Of course, the car will navigate the roads through usage of GPS and Google Maps.

The global leader in search engine optimization plans to unveil ready-to-test prototypes in California later this summer with the goal for the car to “shoulder the entire burden of driving.”

Meanwhile, in Wellington Square, Oxford, academics from the university’s engineering science department are developing a car that can memorize a route by “recognizing” its surroundings. The automobile would have the ability to engage auto-pilot when it runs that route more than once, with the driver regaining full control with a tap of the brake pedal.

Do you see Google releasing its driverless car to the market sooner or later? What are your thoughts on the concept? Speak on it in the comments below.