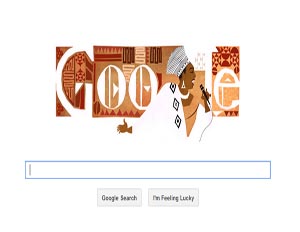 Google is known to pay homage to great thought leaders, historic innovators and music majesty with its popular Google Doodle, and today is no different.

The search giant honors South African performer Miriam Makeba on what would’ve been her 81st birthday, March 4. The illustration of the anti-apartheid icon captures the essence of the Johannesburg-born performer as she wears her traditional clothes with the company’s logo in the backdrop.

Known as Mama Africa, Makeba helped popularize African jazz, a perfect blend of traditional folk music and jazz, in the 1950s. She gained international attention in the 1960s with songs like “Pata Pata,â€ “Qongqothwane (The Click Song)â€ and “Malaika.â€ Makeba won a Best Folk Album Grammy Award in 1965 for her collaboration with award-winning performer-turned-social activist Harry Belafonte in An Evening with Harry Belafonte. Â She performed for President John F. Kennedy the same night Marilyn Monroe sang “Happy Birthdayâ€ to the president.

While she’s widely known for being a performer, Makeba was an activist and even testified against apartheid at the United Nations in 1963, which led to her citizenship being revoked. She joined fellow activists in fighting to get Nelson Mandela out of prison. When he was released, Mandela assisted with her return to the country in 1990.

The famed singer died in 2008 after a performance in Italy.