Rep. Liz Cheney Has Been Removed From Her Post For Being Honest 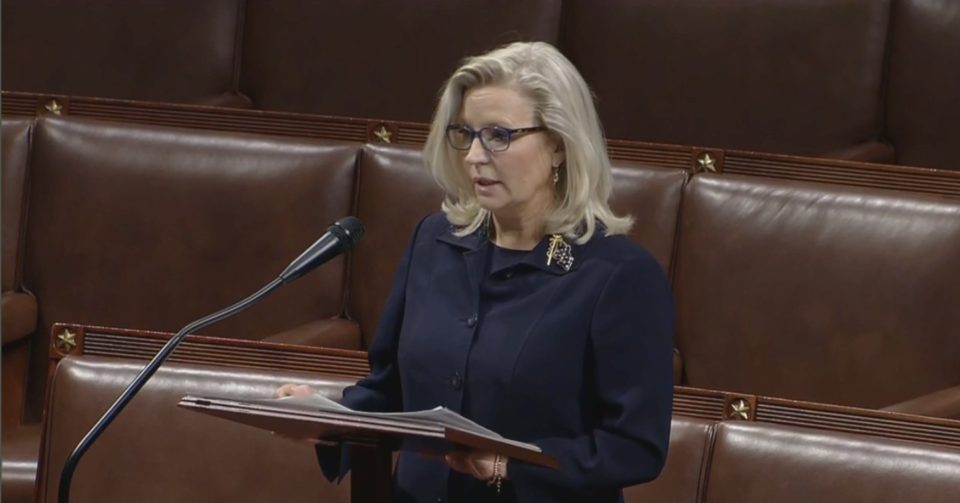 Rep. Liz Cheney has been removed from the No. 3 post in the Republican Party. Image: Twitter/@EugeneDaniels2

Reuters – U.S. House of Representatives Republicans on Wednesday removed Liz Cheney from their leadership, punishing her for rejecting what she called former President Donald Trump’s “big lie” that last year’s election was stolen from him through election fraud.

The action signaled that Trump, despite his decisive election loss to Democrat Joe Biden in November, has solidified his hold over House Republicans as he jockeys to play a major role in the 2022 congressional elections and flirts with another run for the presidency in 2024.

After her ouster as the No. 3 House Republican was carried out in mere minutes in a closed-door meeting, a defiant Cheney told reporters that she would lead the fight to bring her party back to “fundamental principles of conservatism.”

“We must go forward based on truth. We cannot both embrace the big lie and embrace the Constitution,” Cheney said.

She also vowed to prevent Trump from ever regaining the presidency, telling reporters: “I will do everything I can to ensure that the former president never again gets anywhere near the Oval Office.”

The Wyoming https://www.reuters.com/world/us/shes-hero-liz-cheney-down-not-out-wyoming-after-crossing-trump-2021-05-12 congresswoman, daughter of former Vice President Dick Cheney, is a lawmaker with impeccable conservative credentials. She one of 10 House Republicans who voted with the Democrats in January when the House impeached Trump on a charge of inciting insurrection. Senate Republicans provided the votes in the following month to prevent Trump from being barred from holding future public office.

Trump’s January impeachment – his second – focused on an incendiary Jan. 6 speech in which he urged his followers to “fight” his election defeat, which he claimed falsely was the result of widespread fraud. A pro-Trump mob then stormed the U.S. Capitol building, an attack that left five dead.

During Trump’s time as president, Republicans lost their majorities in the House and Senate and he lost the White House.

Cheney’s critics said her criticism of Trump’s false claims about the 2020 election distracted from party messaging about Democrats and President Joe Biden’s agenda. Cheney rejected House Republican Leader Kevin McCarthy’s contention that Republicans must refrain from criticizing Trump to win back control of Congress in 2022.

“We have seen the danger that he continues to provoke with his language,” Cheney said of Trump.

Cheney ended her brief remarks to reporters without spelling out whether she will remain in the House and run for re-election next year – she could face an uphill battle in Wyoming, where Trump is still revered by Republican voters – or take another path.

In a statement issued after the vote, Trump launched personal attacks on her, saying, “Liz Cheney is a bitter, horrible human being.” He added, “She has no personality or anything good having to do with politics or our country.”

The Cheney drama could further deepen divisions within her party. Trump and McCarthy have endorsed Representative Elise Stefanik https://www.reuters.com/world/us/loyalty-trump-catapults-elise-stefanik-into-republican-stardom-2021-05-11 to succeed Cheney as party conference chair, a role that helps develop Republican positions on legislation and assists rank-and-file members on an array of issues.

Stefanik, who gained prominence as a Trump defender, has drawn criticism from some Republicans for a voting record that they portray as being out of step with conservatives. Republican House members will vote on her nomination on Friday, Representative Louie Gohmert told reporters.

Representative Adam Kinzinger, one of the few House Republicans publicly defending Cheney, said in a tweet, “I believe our open lies are an absolute abdication of our duty, and it is shameful.” Kinzinger was referring to the false claims made by Trump and echoed by others in the party that there was widespread voting fraud in the November election in which Biden defeated Trump, who has claimed that he actually won.

Most Republican lawmakers, including McCarthy, have sought to placate Trump, whose claims of election fraud were rejected in multiple courts as well as by state and federal election officials.

“It’s clear that we need to make a change,” McCarthy told his fellow Republicans in a letter announcing Wednesday’s vote.

The show of fealty to Trump has already opened House Republicans to claims that they are punishing a truth-teller in a move that could alienate swing voters vital to Republican chances in election battleground states.

The move against Cheney contrasts with McCarthy’s decision not to act against Representatives Marjorie Taylor Greene and Matt Gaetz. The House’s Democratic leadership stripped Greene of her committee assignments for past remarks that included support for violence against Democrats. Gaetz is the subject of a federal child sex-trafficking probe.