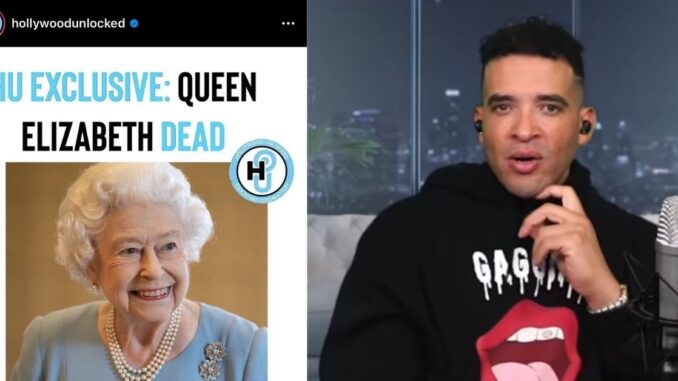 The gossip site Hollywood Unlocked is under fire for posting an “exclusive” story on Tuesday claiming that Queen Elizabeth was dead.

“Sources close to the Royal Kingdom notified us exclusively that Queen Elizabeth has passed away,” the site claimed in its article.

According to the outlet, the Queen reportedly was due to attend the wedding of British Vogue editor Edward Enninful but allegedly died a few hours before the ceremony was set to take place. The site’s owner, Jason Lee, has doubled down on his reports saying his outlet does not report lies.

“We don’t post lies and I always stand by my sources. Waiting for an official statement from the palace,” Lee tweeted on Tuesday.

We don’t post lies and I always stand by my sources. Waiting for an official statement from the palace.

After an apology from an account claiming to be the outlet was posted online, Lee sent out another tweet standing firm in his reports of the Queen being dead.

“Woke up to some fake account posting a retraction,” Lee tweeted on Wednesday. “We do not know that account and we have not retracted our story. There has yet to be an official statement from the Palace. Staying tuned.”

Woke up to some fake account posting a retraction. We do not know that account and we have not retracted our story. There has yet to be an official statement from the Palace. Staying tuned.

However, many are calling out Lee for seemingly posting the news before the Royal Family confirmed it if it’s true. Many have pointed out that Queen Elizabeth is not known to attend celebrity weddings and is isolated at Windsor Castle after testing positive for COVID-19, Newsweek reports.

British journalists have also said royal protocols have been in place to break the news of the queen’s death, which will come from Buckingham Palace informing the U.K. prime minister, who will then announce the news on the BBC.

Lee has since become a trending topic along with “Queen Is Dead.” Many are calling out the gossip blogger for seemingly wanting to break a story first rather than following official protocols.

“Jason, this is a terrible mistake and I have no idea what you think you’re doing. The Queen is not dead,” screenwriter Emma Kennedy tweeted in response.

“I get this guy is out for clout but try harder, my man,” added someone else.

“Not sure who this dude is but Jason Lee doesn’t understand how the palace operates,” one user wrote. “They announced Prince Philip’s death like 32 seconds after it happened. They announce births as soon as the head hits the air.”

News just in from Buckingham palace that the queen is still alive pic.twitter.com/oa7vBgGvz6

jason lee really expects us to believe that out of all the reputable news outlets buckingham palace chose hollywood unlocked to break the news about the queen pic.twitter.com/23DQpzbnCa

I wanna know who in Buckingham Palace would see #QueenElizabeth passed away in her bed and think to themselves “oh bloody f*cking hell, we must phone Jason lee!” pic.twitter.com/729KULRuBG

For now, the story remains up on its website, and Jason Lee isn’t backing down.