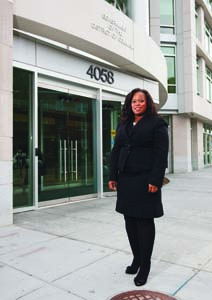 As the nation’s unemployment rate continues to hover around 9%, in Washington, D.C., statistics are far bleaker, especially since government employment is considered a declining industry in the U.S. As of August, the District’s unemployment rate hovered around 11%, while its youth led the country with a staggering jobless rate of 49%. These dismal numbers are what galvanize Kameron Kima-Cherry’s main objective: keeping her staff focused on getting the area’s residents ramped up and back to work.

Influences: Kima-Cherry’s mother worked as a human resources recruiter in their hometown of Las Vegas. As a teen Kima-Cherry worked for her mother during the summers and after school, and learned the value of matching candidates with company culture. Finding someone with the right skill set and educational background was important, but a cultural match was key.

Experience: Upon graduation, Kima-Cherry landed a sales position with AT&T that required strong interpersonal skills and the ability to identify technology tools to make the company run more efficiently. “[I was charged with] uncovering needs that they didn’t know they had, and then plugging a product into it. So it’s not coming in and saying, ‘You need BlackBerrys.’ It was watching employees doing service calls and saying, ‘Your people write down everything they do and then you have to wait for that piece of paper to process the order. What if you used a Bluetooth pen that automatically transmits the information back to the company?’â€

Previous Position: Operations manager with the Washington, D.C.-based Corporate Executive Board in their newly formed Leadership Academies, which trains CEOs and other corporate officers, both domestic and international, in best practices of hard and soft skills. “I was interviewed by the two executive directors and one of them hired me as executive assistant for the team he was building. The platform was new and they were a fresh team so I grew with the job and was promoted after one year.â€

Skill Set: “My ability to listen, identifying others’ strengths, and helping them develop.â€ Kima-Cherry is also able to analyze complex work situations and is solution oriented. She understands how to connect the right people based on organizational opportunities and challenges, and she leads by example.

Learning Curve: Kima-Cherry struggles with demonstrating how HR can result in a consistent and positive return on investment for any company. “We’re a touchy-feely profession. We can tell you how this initiative will make everyone feel better, but if you go to a CEO in the public sector and say that, it doesn’t translate into money,â€ she says. “We have to be able to talk as HR professionals in hard skills and find out how an initiative can create ROI. Yes, we’re HR and we have good intentions, but we have to put our intentions around business, processes, and improvements so that people can see the benefits.â€