Grambling Players Announce They Will Return to Practice, Play Saturday 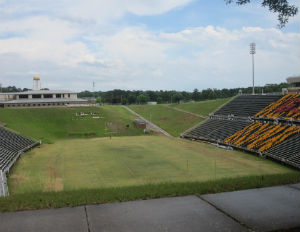 Grambling did not play a scheduled game against Jackson State Saturday.

As promised, Grambling’s players have spoken: They will practice this week and play on Saturday. HBCU Gameday has obtained an email from Grambling’s Nate Smith who says the team has decided to return after speaking with former coach Doug Williams.

Below is the excerpt:

To Whom It May Concern:

As part of the athletic program at Grambling State University, the football team, took a stance on what we thought was right. We did not quit on our university. There are many problems that exist and if no one says anything, nothing will come of our institution. We hope Coach Eddie Robinson and his legendary players can appreciate that we stood up for what we thought was right. After coming into contact with different sources, we decided to reach out to the one person we trusted, Coach Doug Williams, with our concerns. His main statement to us was, “Go out there and play football.â€ He also put us in contact with Jim Bernhard out of Baton Rouge.

A meeting was held with Mr. Bernhard as well as, Douglas Porter, Ezil Bibbs, Roy Jackson, Henry Dyer and Howard Davis. The meeting confirmed him [Jim Bernhard] as being committed with our best intentions at heart and that he would ensure we had updated facilities, but we had to agree to being back practicing Monday, October 21 and finish the remainder of our season. Although we are going to continue our season, we have not forgotten the situation and how we’ve gotten here. We would like to say thank you to Coach Williams, the Legends and Mr. Jim Bernhard. Grambling has given us the opportunity to be a part of its legacy and we are only looking to improve conditions for the university and future student-athletes.

On Eve of NBA Season, Stephen Curry Steps Into the Spotlight With Under Armour

Moving Back to Nigeria: U.S-Trained Professional Shares His Career Experience

FacebookTwitterYoutube
← On Eve of NBA Season, Stephen Curry Steps Into the Spotlight With Under Armour ← Moving Back to Nigeria: U.S-Trained Professional Shares His Career Experience
×
'