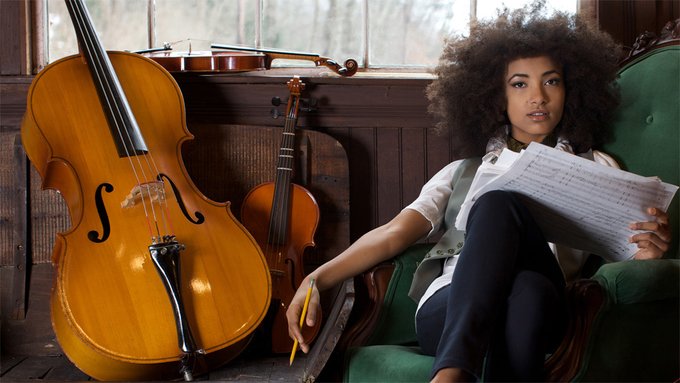 Musician Esperanza Spalding said that she wants 300 people to give a thousand dollars by June 3, 2021 to help fund a BIPOC artist sanctuary in Ore. Photo credit- Twitter

According to KOIN, Esperanza Spalding is one of the brightest musical stars to ever come out of Portland, Oregon. She won the first of her four Grammys as Best New Artist in 2010, while beating out Justin Beiber and Drake. It was reported that the jazz bassist, singer, and Harvard music professor wants to develop the creativity of other Portland-area musicians by establishing a BIPOC (Black, Indigenous, People of Color) artist sanctuary in North Portland.

Google slides show visual representations of what Spalding described as ‘a multi-year experiential installation’ that would be open to artists and invited guests. The space would include everything from an organic garden to a short-term artist residency.

“It would have a garden to grow healthy food, a recording studio, rehearsal spaces, a reading room, and gathering places for Portland’s talented musicians of color to share, create and collaborate,” Spalding told KOIN in an interview.

KOIN also stated that Spalding located property in North Portland with enough space to make her vision a reality. Spalding is asking supporters to donate to her creative vision through her GoFundMe campaign.

“I’m asking 300 people to give a thousand dollars by June 3,” Spalding said in her interview with KOIN. “I’ll do a private concert in gratitude for those 300 people once the money is raised … as the artists, we’ll do the rest.

Spalding also told KOIN that artists need time in the sanctuary to create the good works that are sent out into the world.

Willamette Week reported more details, stating that Spalding is looking to raise $300,000 to help purchase a 0.75-acre property in St. Johns. She plans to turn it into a multifaceted creative space catering to artists of color in a space called the City Sanctuary. The property is already under contract, according to Willamette Week.

Spalding stresses the importance of nurturing creativity in a sanctuary.

“BIPOC artists are frontline cultural workers, in the sense that, we’re needed to triage, respond-to, alchemize into beauty the violent chaos of our times. To do this cultural metabolizing work best, artists need the renewal and invigoration that comes in the healing presence of nature and fellow BIPOC creatives,” Spalding said on her Facebook page.