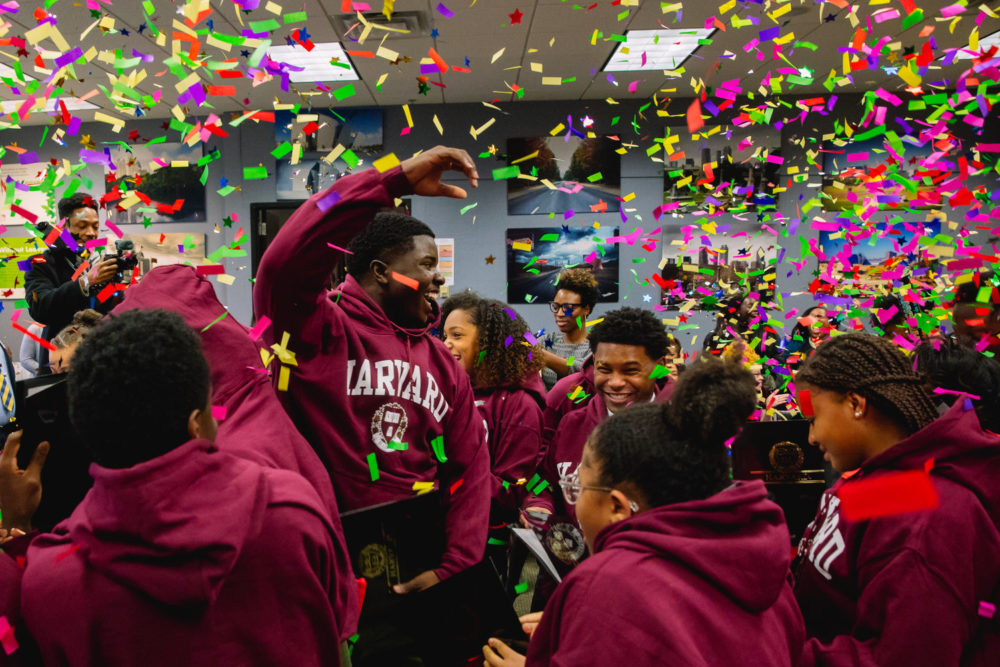 The Art Institute of Atlanta, where the surprise announcement was made, awarded the students $10,500 in scholarship money to attend the prestigious program. An additional $88,000 needs to be raised to support the students’ tuition, room and board, and travel. Donate here.

“I spend my summers teaching at Harvard,” Fleming explained, “which wanted a more diverse program. So I designed this diversity pipeline program and Harvard approved it.” The 25 students chosen on Sunday make up its inaugural cohort.

Fleming and his team sent word out to several school districts in the Atlanta area and received 150 applications from students in grades eight to 11 for the 25 slots.

“We did very little advertising. Students needed to complete an application that included a teacher recommendation and a one- to three-minute video speech.”

Once the 25 students were selected, they were invited to the Art Institute of Atlanta for what they thought was an in-person interview—the next stage in the application process. In fact, they had all been selected but didn’t know it.

“At first, we had a mix and mingle with community leaders. We wanted to evaluate their ability to be social. Then some students participated in a 15-minute speaking exercise, but because we couldn’t accommodate all of them, some didn’t get to speak, so they were distraught, thinking they had missed a chance to be evaluated.”

But soon Fleming told them to reach under their chairs for a T-shirt and folder and to huddle in the center of the room. Once the students opened their folders and saw Congratulations! there was euphoria all around, as well as a few tears. Confetti actually fell from the ceiling.

“It was really emotional for the students and parents,” Fleming told me.

The next six months the students will be in training with Fleming, Harvard‘s assistant debate coach and an undefeated former speech and debate middle school coach; as well as Harvard instructors who will fly down to train the students in critical thinking, analysis, research, and much more.

“Every leader must be able to think and persuade,” Fleming says. “Debate teaches that.”

As Tripp Rebrovick, Ph.D., Harvard’s head debate coach, is quoted as saying in Rolling Out, “No other activity imbues young people with a skill set that will train them to be effective students, communicators, and citizens. Debate combines competition with advocacy, making it rewarding … to learn to research, read, speak, and write successfully.”

To read a list of the students who’ve been accepted and the schools they attend, visit the website of the Harvard Debate Council Diversity Project.