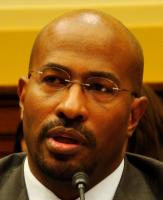 President Barack Obama is not only the first black president, but the first green president, said Van Jones, special adviser for green jobs, enterprise, and innovation with the White House Council on Environmental Quality.

With unemployment rates for African Americans at 13.3% in March, compared with the national average of 8.5%, blacks are in dire need of economic growth. Obama is sending help, in the form of green jobs, as a pathway “out of poverty to prosperity,â€ said Jones during a conference call, adding that his goal is to dispel the myth that green jobs are not for African Americans.

“Cities produce 75% of greenhouse gas emissions. We cannot beat global warming without greening our cities,â€ he said. “Buildings don’t weatherize and retrofit themselves. The solutions for global warming are jobs and contracts in the urban environment.

“There is a wingspan on those jobs that go from GEDs to Ph.D.s — every kind of person, every color, every class can participate and I think it is important that all communities get in on the ground floor of this stuff,â€ Jones said.

Under the plan, the federal government will give money to governors and mayors who will distribute the funds throughout their communities. Jones hopes that organizations such as the National Urban League will compete for and begin to train people to participate in the green energy revolution.

In addition, recent guidance from the Office of Management and Budget will make sure that the money is dispersed in a way that is consistent with equal opportunity employment, local hiring, and support for disadvantaged and small businesses.