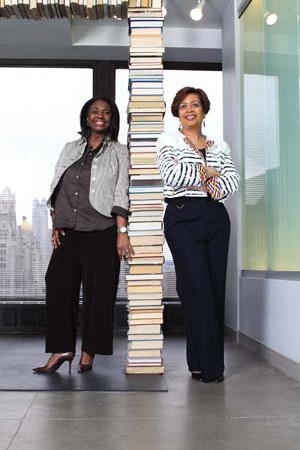 A company’s success and influence are defined by its leader’s ability to identify a need, capture an audience, and adapt to environmental change to maintain a dominant market position. Thomas Burrell understood those dynamics when he first opened Burrell Advertising in 1971. He was driven by providing clients with financial value while creating a showcase for positive, progressive black images. “We depicted them as families that had lives, loves, passions, and emotions,â€ he said when the firm was named BE’s 2002 Advertising Agency of the Year. “The response was enormous simply because we had not seen ourselves in a positive setting. It gave people a wonderful feeling about the products being advertised as well as affection for the companies delivering those messages.â€

As Burrell proved adept at crafting messages and images that delivered profits to clients, it faced the demands of a constantly evolving industry. Over a 30-year span, the firm had to repeatedly reinvent itself with every major development, from mainstream Madison Avenue firms invading the turf of African American agencies to major cultural shifts that drove fashion and entertainment such as the rise of hip-hop culture. As Burrell sought to stay competitive through the acquisition of more business from clients seeking to reach a targeted demographic and pursuit of general market accounts, the firm had to grow in size and scale to offer a full range of marketing services. To fuel this expansion, Burrell sold 49% of the firm to the France-based global media giant Publicis Groupe in 2000, and changed its name to Burrell Communications. “The term ‘advertising agency’ [is] outdated. It suggests that we limit ourselves to a little box of advertising agency tools to solve client problems–even if the tools aren’t ideal. We are marketing communications specialists. You tell us the problem, and we use the tools to help solve that problem whether they’re in the box or not.â€

What was outside of the box, particularly for a black agency at the time, was Burrell’s focus on developing a succession plan for his organization. In 1996, he began offering equity partnerships to members of his management team and grooming prospective successors. Among them were Fay Ferguson and McGhee Williams Osse. “Out of that management committee, McGhee and I were the ones who had grown up in the company,â€ says Ferguson.

Today, Ferguson and Williams Osse represent the visionary leadership driving Burrell Communications Group L.L.C. (No. 4 on the be advertising agencies list with $21 million in revenues). The two purchased 51% of Burrell and became co-CEOs in 2004, and set out to write the next chapter of the firm’s history and make it a transformative force among minority agencies vying for the $800 billion African American consumer market. “We were aggressive about new business and organic growth from our existing clients,â€ says Williams Osse of their strategic plan. “That made more sense. Here were people that knew and trusted you.â€

Over the past few years, the two women have redesigned the firm by adding new employees and expanding its client roster. In 2006 Lewis Williams, who had worked with Burrell in the 1980s as an associate art director and then at Leo Burnett Business for 15 years, eventually becoming senior vice president/creative director, was named chief creative director–and business increased by 15%. Since that time they have added more than 20 new clients, including Walt Disney, Supervalu, Lilly, 3M, American Airlines, and most recently Comcast. The firm has also increased business with several existing clients such as Toyota, McDonald’s, General Mills, and Procter & Gamble.

To service these accounts, Ferguson and Williams Osse–two of Black Enterprise’s Most Powerful Executives in Marketing & Advertising–expanded the firm’s portfolio of advertising, media relations, research, and engagement marketing services in 2008 to include digital solutions through new technology and social media. To bring the firm into the interactive era, they hired Donald Moore, a former agency team leader at Google, in 2009 as president of the new digital department, which has created campaigns such as American Airlines’ Black Atlas and Toyota’s award-winning “If Looks Could Kill.â€ Because of these bold, deliberate decisions, Burrell hasn’t lost a single client even in the midst of the Great Recession and a sluggish economic recovery. “It has been phenomenal the last few years,â€ offers Moore. “The economy was tough, but if you looked at our new business track record lately, both co-CEOs have led teams that have brought new business in house. So, that leadership has been extraordinary.â€

Walking into Burrell’s corporate headquarters in downtown Chicago, you’re overwhelmed by the creativity and dynamism. Overflowing with art, campaign images, and awards, the offices buzz with activity from a mix of professionals diverse in age and ethnicity. It is evident that Tom Burrell’s protÃ©gÃ©s are staying true to his legacy but also driving relevant messages to the ever-changing needs of the marketplace. For its industrywide leadership, unparalleled client service, and innovative delivery of powerful, positive images and messages to the African American community, Black Enterprise has named Burrell Communications Group L.L.C. our 2011 Advertising Agency of the Year.

Research Brings Results
Burrell’s agency helps clients reach three distinct groups: the African American market, the “newâ€ general market, and the “yurbanâ€ (young urban) segment. Both Ferguson and Williams Osse will tell you a big part of Burrell’s success has been the result of not taking their audiences for granted. “We always start from a strategic standpoint,â€ explains Ferguson. “That’s very important to us. We truly try to understand the African American consumer, what motivates them, what’s going to compel them to buy this product or service over a competitor’s. So, we study the segment and we truly go about making sure that when we bring a plan to our clients that it’s data driven.â€

Neil Golden, chief marketing officer, of McDonald’s USA, confirms that assertion. “Burrell Communications has been a marvelous strategic partner and continues to provide important insights that keep the McDonald’s brand relevant, contemporary, and engaged with the African American consumer segment, as well as the general market,â€ he says of their work for the fast-food giant, the agency’s oldest partner and a client since 1978. “Over the years, Burrell has helped ensure that we’re able to move with the African American customer and has been on the cutting edge of creativity for McDonald’s advertising.â€

Their focus on insights was the basis for the creation of the highly successful “If Looks Could Killâ€ campaign for the Toyota Camry. The account team believed the launch of the 2007 redesigned model offered a prime opportunity to boost Toyota’s market share among African American women. After conducting a survey of black women, they found mid-size passenger cars lacked appeal with those consumers. The study further identified a segment of black women as “flossersâ€–African Americans between the ages of 25 and 40 with a household income of $70,000 or more who “want to drive fast and be noticed.â€ Moreover, the research revealed that the African American car-buying market registered largely single and female. But the