#GT2012: Meet The Reigning Champions of The Golf & Tennis Challenge 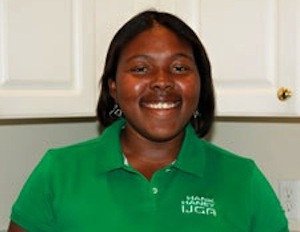 A golf prodigy, Super Bowl champion, corporate league team captain, and tennis association president go to the 2011 Black Enterprise Golf & Tennis Challenge, and win big. As the top male and female competitors at GT2011, they earned many of the same fruits of victory as other winners in the golf and tennis tournaments, including bragging rights and impressive trophies. But as the top performers, the also earn something more: the coveted Purple Jacket.

The journeys of how each of these aces triumphed to victory at the 18th annual event is unique to each of them, though for all, earning the Purple Jacket took practice, support, will, and a love of competition. The positive energy of other Challenge attendees also contributed to the enjoyment of their experience overall.

Black Enterprise caught up with the GT2011 Champions to see what they are doing now and if they intend to defend their titles.

Sixteen-year-old Bria Sanders from Memphis, Tenn., first stole everyone’s hearts at last year’s competition with her infectious smile. She then took the title for the women’s golf competition, showing that though she may have been youngest competitor, she is no rookie. Starting at the age of three with a plastic set of clubs, it is not a surprise that the precocious young golfer, who just planned to have fun, won it all.

“Last year was my first time at the Golf & Tennis Challenge. My dad just told me that we were going on a surprise trip,â€ says the rising junior at Hank Haney International Junior Golf Academy. Sanders still lives in Tennessee, but attends the high school with other golf prodigies in Hilton Head, South Carolina, for most of the year.

Bria’s favorite part of being at the Golf & Tennis Challenge last year was returning to the courses at the Doral Golf Resort & Spa and being able to playing the famed Blue Monster course, where she not able to compete when she was younger. “I think other young people can go have fun and exercise. Golf is a great sport. Tennis is too but it’s too much running involved for me (laughs). Golf teaches you character, honesty and discipline.â€

Though she is waiting for her parents to decide if she can attend GT2012, Bria offers advice to golfers in this year’s competition: “Practice hard and remember that you are not competing against other people, but against the golf course. Have fun! If you’re not having fun you probably shouldn’t be playing.â€

Two-time Purple Jacket winner Alvin Harper is not new to taking home championship titles. As a wide receiver for the Dallas Cowboys, Harper won two Super Bowls in a row and played in the National Football League for nine years. After winning the men’s golf competition in 2010 and 2011, Harper plans to get a three-peat and win the men’s golf competition again this Labor Day Weekend.

Alvin became an ardent golf fan in 1997, towards the end of his football career. Some of his friends who played in the PGA tour got him interested. He says, “When I moved to Tampa, I started playing everyday. It is such a challenging sport that is different every time you play and that’s why I love it!â€

Harper admits that being a former professional athlete has given him an advantage. “You have to have decent hand—eye coordination and that is [key to] what I did for a living, since I was a receiver,” he explains. “Also, playing in Super Bowls has helped me to contain some of that nervous energy. Being able to withstand pressure, especially during competitions such as the Black Enterprise Golf & Tennis Challenge, helps a lot. Pressure can bust some water hoses.â€

Ever since Harper stumbled on the Challenge while living in Orlando years ago, he has attended annually. “There are a good group of people involved in the event and playing in the tournament,” he says. “Instead of being around people who do not have any motivation for life, everyone [at the Challenge] has a lot going on and are doing pretty well in their businesses and careers. You can feel the positive energy. I haven’t seen anything negative happen since I have been attending for the past five years.â€

Harper also shared some advice for beginning golfers: “Work on your short game first. A lot of beginners and amateurs try to hit the ball far — they want to hit the driver all the time. But I learned the game by putting and chipping — the short game — because that is the area where you score. You can hit the ball far but it also may be crooked. You have to be able to putt and chip the ball well and get it in the hole. Start from the putting green and then back to the tee box.

Harper is currently enjoying retirement, playing golf, and watching his two teenagers, one in high school and the other on her way to college, grow up. Originally from Lake Wales, Florida, he now resides in Washington, DC.

For Lisa Webber, winning is all in the family. Not only did she snag top honors in the 2007 and 2011 Challenge tennis competitions, her sister Deborah Webber won the event’s the Next Chef Challenge in 2011 as well. Webber, her three sisters and a brother have been attending the event together for years now. Though they all live in different parts of the country, they reunite at the Challenge each year for fitness, fellowship, and fun.

Lisa started taking tennis lessons in 2000 while living and working in Illinois. She found out about Black Enterprise’s tennis tournament after moving to New Jersey. Her friends Jimmy and Janet Jones, who have been attending the Challenge since the event’s inception, invited her to attend with their family. The Jones’ are also acquaintances of Dr. Franklyn Scott, the 2011 Men’s Tennis Challenge winner.

Webber says she likes to attend because “aside from the competition, you get good exercise while having fun. You can meet and greet people, and exchange information. I have built several business relationships from attending. It’s a nice getaway for professionals who are interested in golf and tennis.â€

Lisa is the head of quality management and regulatory affairs for the Nutrition and Health, North American Division at BASF in New Jersey. Responsible for the health and wellness program in her division, she has led her company’s tennis team to four championship titles. “The tennis competitions are great way for our employees to connect with each others and our clients. They can exercise and build their business relationships simultaneously,â€ Webber explains.

Webber also likes to play golf on occasion, though tennis was easier in Illinois, where the climate would not permit her to play as much golf as she could tennis. She also likes to ski around the United States and abroad. “My job requires some international travel and I enjoy the places I have an opportunity to visit,â€ she admits.

After hurting his back while playing basketball in his late 30s, Dr. Scott, now 63, says that he was “informedâ€ that if he was not going to receive a contract, he should start playing another sport. After running into some of tennis-playing fraternity brothers shortly after his injury, he started to acquire a love for the sport.

Originally from Charleston, South Carolina, Dr. Scott has been involved in sports all his life. After graduating from Claflin College, he went on to Howard University to study oral surgery. He then started his own practice in Philadelphia, Pennsylvania in 1982, where he currently works and resides. In addition to his practice, Dr. Scott is the President of the American Tennis Association, which is partnering with Black Enterprise to support junior tennis players across the country. He is also on the board of directors for Legacy (formerly Arthur Ashe) Youth Tennis and Education, which supports tennis initiatives for students who are economically disadvantaged.

After participating in the Black Enterprise Tennis Challenge annually for more 10 years, Dr. Scott was almost ready to opt out of the 2011 competition. He even decided to bring his two children and three nieces along since they had never been to the event. “Three times I was like one or two points from winning [the competition]. What’s amazing about this last year, at my age I figured I would just go because I love the people,â€ says Dr. Scott. “I was just casually playing and, low and behold, I won. All the other times I really wanted to win. This time I just wanted to relax and have fun and it happened, so it was kind of nice.â€

Dr. Scott says attends the conference each year because it is a great form of stress relief and builds camaraderie with family and friends. He says, “The event is fascinating to me. I have always have been supportive of entrepreneurship, especially amongst people of color. I mentor with the American Dental Association year round and I love having the opportunity to speak to students and young professionals beginning their career.”