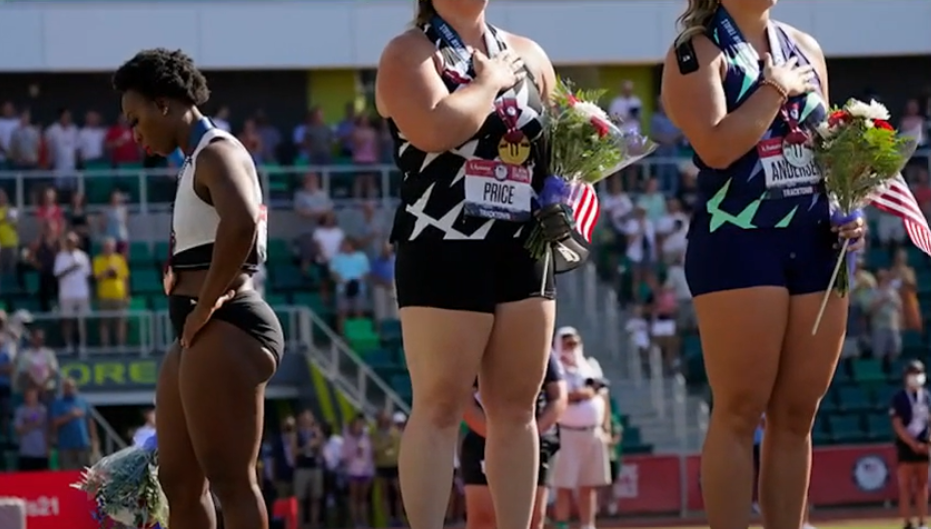 Team USA hammer thrower Gwen Berry went viral over the weekend after she was seen seemingly protesting the national anthem.

Berry came in third at Saturday’s U.S. Olympic track and field trials in Eugene, Oregon. While standing on the podium, Berry turned to the side and put her hands on her waist when the national anthem played. The first and second place competitors faced the flag and placed their right hands over their heart. Toward the end of the “Star Spangled Banner,” Berry put a black T-shirt with the words “Activist Athlete” on her head, CBS News reports.

But Berry feels the timing of the national anthem was a “setup” against her after ESPN noted it was delayed by five minutes from when it was initially scheduled to play.

“I feel like it was a setup, and they did it on purpose,” Berry said. “I was pissed, to be honest.”

She has already vowed to use her platform at the Tokyo Olympics to raise awareness of social injustice in the U.S., People reports.

“They said they were going to play it before we walked out, then they played it when we were out there,” Berry said of the time delay. “But I don’t really want to talk about the anthem because that’s not important. The anthem doesn’t speak for me. It never has.”

Back in 2019, Berry famously protested during the Pan Am games by raising her fist while on the podium, CBS Sports reports.

A spokesperson for the USA Track and Field addressed the scheduled timing of the national anthem.

“[T]he national anthem was scheduled to play at 5:20 p.m. today. We didn’t wait until the athletes were on the podium for the hammer throw awards,” the spokesperson said. “The national anthem is played every day according to a previously published schedule.”

However, for some reason, on Saturday, the national anthem was played at 5:25 pm.