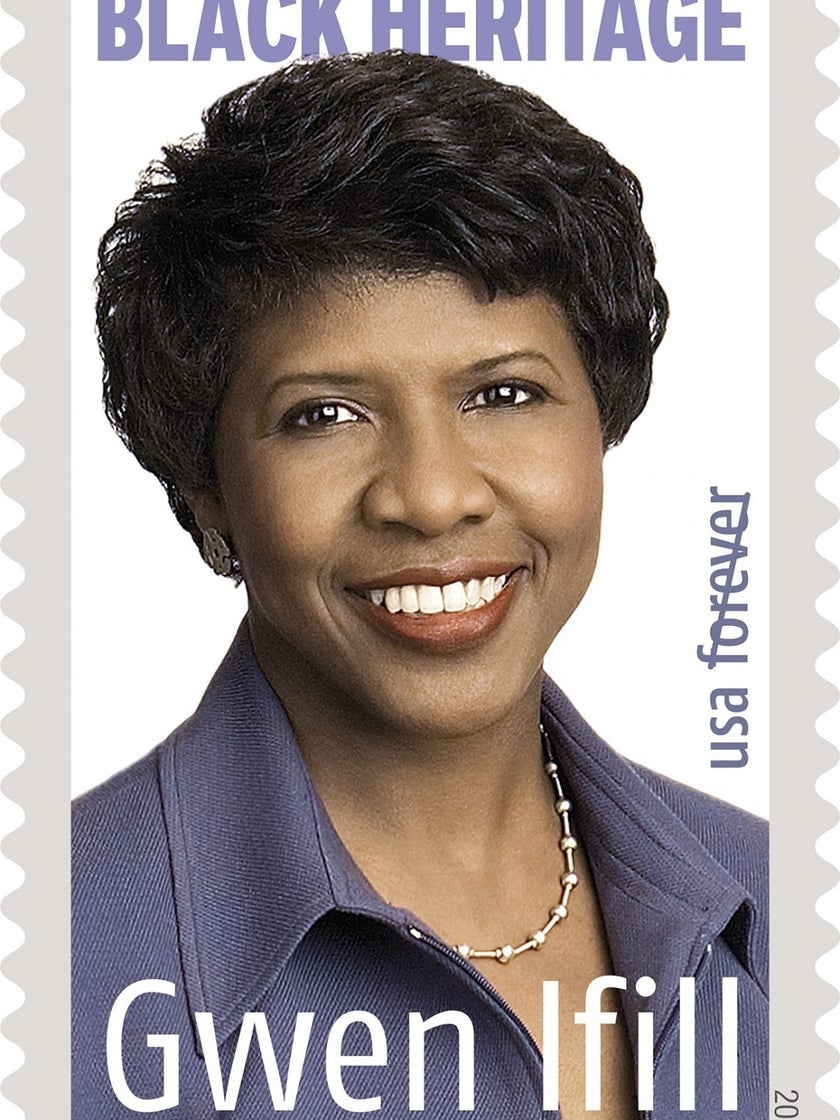 On Thursday, the trailblazing journalist Gwen Ifill was honored with a commemorative Forever stamp.

“These miniature works of art offer something for everyone interested in American history and culture,” said U.S. Postal Service Stamp Services Acting Executive Director William Gicker. “From notable figures such as golf legend Arnold Palmer and esteemed journalist Gwen Ifill to the cultural phenomenon of hip-hop to a celebration of the great outdoors, this program is wide-ranging and adds to the history of our great nation as recorded through the U.S. stamp program.”

As posted on the United States Postal Service website, the 43rd stamp in the Black Heritage series honors Gwen Ifill (1955–2016), one of America’s most esteemed journalists. The stamp features a photo of Ifill taken in 2008 by photographer Robert Severi. Among the first African Americans to hold prominent positions in both broadcast and print journalism, Ifill was a trailblazer in the profession. Art director Derry Noyes designed the stamp.

Also being honored with Forever Stamps are:

Voices of the Harlem Renaissance
These stamps celebrate one of the great artistic and literary movements in American history, the Harlem Renaissance of the 1920s, which firmly established African Americans as a vital force in literature and the arts. Twenty stamps showcase four stylized pastel portraits of these literary figures: writer, philosopher, educator, and arts advocate Alain Locke; novelist Nella Larsen; bibliophile and historian Arturo Alfonso Schomburg; and poet Anne Spencer. African-inspired motifs are used as background elements of each portrait. The pane header shows a cityscape in silhouette with a sun in its midst and the title “Voices of the Harlem Renaissance.” The artist for these stamps was Gary Kelley. Art director Greg Breeding designed the stamps.

Hip-Hop
The Postal Service celebrates hip-hop with four new stamps in a pane of 20. Since its inception more than four decades ago, the electrifying music, dance, and art movement has profoundly influenced American and global popular culture. The stamp art features photographs taken by Cade Martin that depict four elements of hip-hop: MCing (rapping), b-boying (breakdancing), DJing, and graffiti art. The bold, digitally tinted images are intended to appear in motion. The words “Forever” and “USA,” “Hip Hop,” and the name of the element featured appear across the top of each stamp. Art director Antonio Alcalá designed the stamps, which are highlighted with a vivid yellow, green, red and black color scheme. The title of the stamps, printed in red and black, is centered on the top of the pane.

19th Amendment: Women Vote
With this stamp, the Postal Service commemorates the centennial of the ratification of the 19th Amendment to the U.S. Constitution, which guarantees women the right to vote. Inspired by historic photographs, the stamp features a stylized illustration of suffragists marching in a parade or other public demonstration. The clothes they wear and the banners they bear display the official colors of the National Woman’s Party — purple, white and gold. Art director Ethel Kessler designed the stamp with original art by Nancy Stahl.