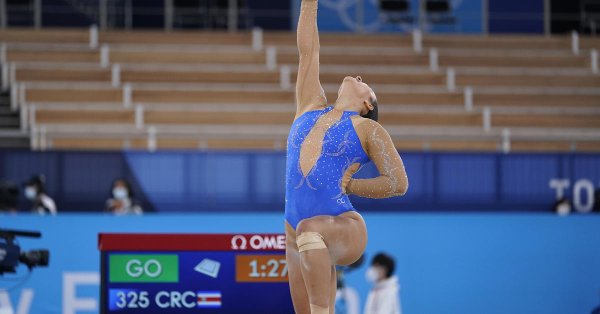 A Costa Rican gymnast is receiving praise on social media for her effortless inclusion of a Black Lives Matter tribute at the end of her floor routine at the Tokyo Olympics.

Luciana Alvardo included the usual flips, dips, and twists while working to impress the judges with her Olympic floor routine. But it was her ending move where she took a knee, put her left arm behind her back, and raised her right fist to the sky that garnered media attention.

Alvarado had already made history as the first Costa Rican gymnast to ever make it to the Olympics, Today reported. But the 18-year-old made her Olympic debut more memorable by adding an intentional move in silent protest against inequality.

“Because we’re all the same and we’re all beautiful and amazing,” Alvardo told the Associated Press.

She went on to explain how she and her little cousin previously made plans to incorporate the Black Lives Matter tribute into their floor routines.

“My cousin and I, we both do it in our routines,” Alvardo revealed on the GymCastic podcast. “And I feel like if you do something that brings everyone together, you know, and you see that here, like ‘Yes, you’re one of mine, you understand things’, the importance of everyone treated with respect and dignity and everyone having the same rights because we’re all the same and we’re all beautiful and amazing so I think that’s why I love to have it in my routine and I love that my little cousin does it on her routine, too.”

The International Olympic Committee (IOC) made recent changes to its rules about protesting at the Tokyo Olympics and allowed for some demonstrations to occur before the competition, CBS News reported. However, Alvarado did not qualify for the finals and will likely not face any repercussions since the move was incorporated into her routine.