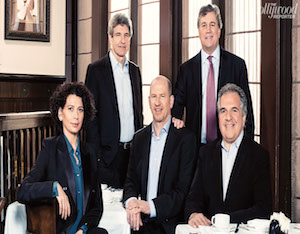 A hacked document, reportedly leaked by Guardians of Peace, appears to unveil a treasure trove of sensitive information pegged to a film studio in Hollywood.

Sony Pictures Entertainment, home to The Amazing Spider-Man franchise, is one of the biggest film studios in Hollywood. A public Pastebin file was sent from an anonymous e-mailer and contains full-length versions of five upcoming Sony fins and a host of internal documents that suggest news that many already know: Hollywood executives are majority white and male.

A corporate spreadsheet which contained the salaries of more than 6,000 Sony Picture employees, including the company’s top executives, has not been confirmed or denied by Sony. “The theft of Sony Pictures Entertainment content is a criminal matter, and we are working closely with law enforcement to address it,” a company spokesman told The Washington Post. On the spreadsheet, employees’ names, job titles, home addresses, bonus plans, and current salaries are all visible and documented.

By looking at the list’s “annual rate,” you can see a very real trend among the people earning the most. Keeping in mind that these numbers are unconfirmed, the upper echelon employees of Sony Pictures with the highest annual rates appear to be nearly entirely white men. Seventeen Sony Pictures employees pull in $1 million or more in annual rates. Out of these seventeen men, only one – Amy B. Pascal, the co-chair of Sony Pictures – is a woman. One other – Dwight R. Caines – is African American, and Man Jit Singh is South Asian. This leaves the percentage of high ranking Sony Pictures’ employees at 94 percent male and 88 percent white.

See for yourself in the image below: 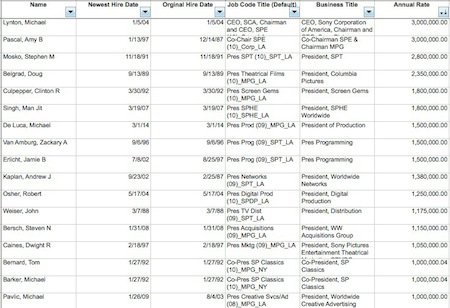 This unfiltered look at seeing who’s making the decisions and making the lion’s share of the profits in a large corporation is an interesting development. While Sony Pictures isn’t the only one with a predominantly white and male leadership, if this information is true that means that a major Hollywood studio is less diverse than some of the corporate boards in American business.