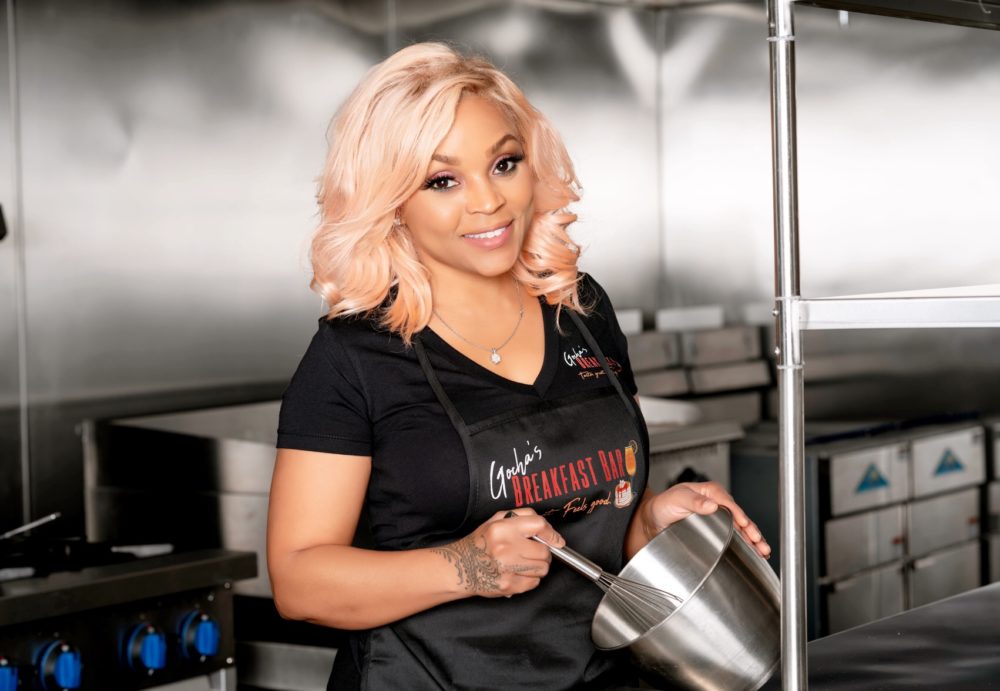 Gocha Hawkins was bothered that her Southwest Atlanta community, Cascade, had limited dining options whenever she wanted breakfast. The owner of Gocha’s Hair Salon, located a few miles north in Midtown Atlanta, paid close attention to the influx of fast food chains in the area, noticing the lack of upscale places to eat that serve locally sourced food and savory signature cocktails.

“We didn’t have options over here,” the petite, Detroit native said of her neighborhood. “What I wanted to do was take breakfast, combine it with a bar, and make sure that people are having a great time.”

Gocha’s Breakfast Bar is the remedy she envisioned. With 30 employees on staff, the restaurant is open for limited business hours throughout the morning and early afternoon. The restaurant’s menu – living by the slogan “tastes great and feels good” – consists of recipes Hawkins prepares in her own kitchen like krunch-tastic French toast, shrimp and grits, veggie-based impossible burger with a side of parmesan truffle fries, buttermilk biscuits drizzled in honey glaze, candied maple bacon, and avocado on multigrain toast.

The award-winning hairstylist and cosmetologist responsible for trimming hairstyles for Nicki Minaj, Serena Williams, Beyonce, Kelly Rowland, Drake, T.I. and Lil Jon intentionally added salmon, whiting, catfish and veggie sausage to the menu to provide other food options and to keep the customers from becoming “stuck in a box.” “It was a need over here,” the pescatarian hairdresser said. “It makes me feel really great to know that I opened something that was a need. The hair salon is a luxury; people don’t have to get their hair done, but everybody loves to eat and drink. The people that live in this area are so excited for us to be here.”

Identifying herself as a “visual person that likes the best of everything,” Hawkins originally came up with the idea to open a restaurant in 2006 while she was living in Orlando. Her original concept was a fine dining establishment that served dinner. Then the market crashed — forcing Hawkins to put her plans on hold. Meanwhile, her family kept encouraging her to open her own spot.

Hawkins admits she didn’t listen to her relatives immediately but eventually knew the right moment would arrive for her to pivot into hospitality. “Whenever my family and friends come to town, they’re always wanting me to cook,” the cast member on WE TV’s reality series L.A. Hair said, calling cooking her “passion.” “That was not my focus, but I do it at home, so why not bring it to the restaurant?”

Hawkins signed the lease for the restaurant in August 2018. The determined maven recruited two restaurant consultants to guide her through logistics. The former NBA image consultant believes delaying her 13-year-old goal to get proper guidance and mentorship are what prepared her for success.

“The main purpose of opening up a restaurant is that we wanted to be an asset in the community,” Hawkins declares. “We are a small black business and then a woman [minority-owned] business. We just want people to continue to talk about us and come see us. We will continue to live up to the expectations of great, quality service, consistent food, and make sure that you guys are having a great time.”

Hawkins, who moved to Atlanta in 2010, is satisfied with her decision to keep her business in her predominately African American community away from the mixed development politics occurring throughout metro Atlanta. Gocha’s Breakfast Bar is one of 1,400 small businesses in South Fulton. She raves over South Fulton officials being extremely supportive and welcoming when she was obtaining permits and processing all pertinent documentation to open the restaurant’s doors. The process to open the restaurant, she says, was easier opposed to the salon.

Hawkins hopes her new business can make South Fulton more attractive to other business owners and transplants considering relocating to metro Atlanta. One way Hawkins hopes to build bridges with the local community is to open Gocha’s Breakfast Bar after regular business hours to rent out for special events. “At some point, we will probably be opening up at nighttime: probably like 5 to 9,” she said. “That’s what I’m thinking since we have a full bar. For now, we’re just making sure that we’re giving you guys a  great experience by doing breakfast and light lunch.”

Balancing two businesses, Hawkins believes, is rooted in three elements: having a vision, creating a strategy, and the ability to execute the idea. She reiterates that exceptional service is what fuels good business. However, providing quality assurance came at a price for Hawkins’ personal time. She says she has not been able to go to the gym as frequently as she does.

Still, the go-getter attributes prayer, meditation, and a proper diet as day-to-day self-care. There’s no doubt in Hawkins’ mind that Gocha’s Breakfast Bar will perform as well as her eight-year-old beauty salon. Hawkins finds it necessary to constantly reinvent herself and her entrepreneurial goals — something she concludes will guarantee longevity. “You should always have different irons in the fire,” she said.

“I don’t feel like you should ever be complacent and dependent on one income because the way the economy works now, you could be doing well today, and then tomorrow, it could be gone. You should always venture out. The main thing is to make sure that it’s your passion and to make sure that you’re perfecting it, it’s consistent, and you’re really putting a product out there that you can invest in. And that it’s going to be a reflection of you.”