Haitian-Americans Are Struggling To Find Ways To Help At Home 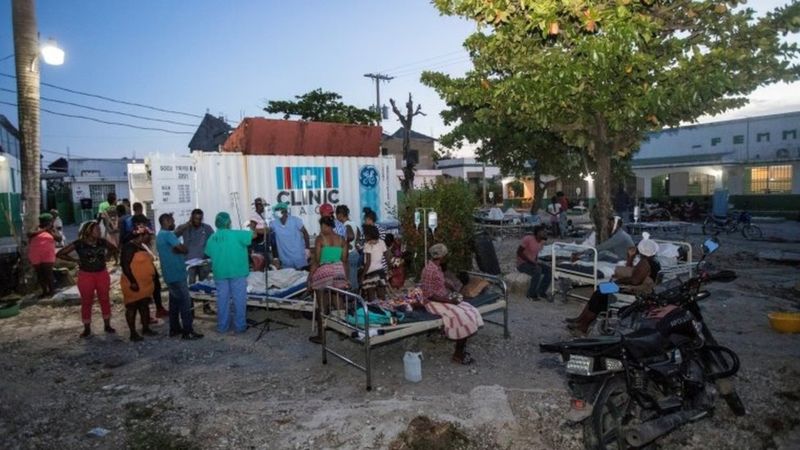 Haiti is dealing with another devastating eartthquake that has killed more than 1,000 citiens (Image Twitter/@MatthewCuyugan)

Reuters – When Haitian-born Mathieu Eugene walks in the Brooklyn neighborhood he represents on the New York City Council, other immigrants from the country approach him to express their grief.

As the poorest country in the Americas is racked by political instability and natural disasters, members of Haiti’s 1 million-strong diaspora in the United States are struggling to find ways to help from afar.

On Saturday, a 7.2-magnitude earthquake struck the southern part of the country, killing at least 1,400 people. Community organizations say they have received a significant amount of interest in donating to the cause.

Still, many Haitians are wary of certain organizations after the missteps in the response to the 2010 earthquake, a 7.0-magnitude disaster that struck the country’s densely populated capital and killed 200,000 people.

Despite billions of dollars raised to help respond to the disaster, much of the money failed to directly help victims amid allegations of misuse.

The tremors come at a sensitive time for Haiti, which is grappling with the assassination of President Jovenel Moise last month and the global pandemic which has sickened 20,000 Haitians and killed 576, according to the Johns Hopkins Coronavirus Resource Center, including the top Supreme Court justice.

On top of that, on Monday and Tuesday,the same part of the country was battered by the rains of Tropical Storm Grace, putting a pause on earthquake relief efforts. The region was also hammered by Hurricane Matthew, a Category 4 storm, in 2016.

“Our collective reaction, I think, was ‘Oh no. Oh my God. Not again.’ What more can we take? What else will this country endure?” said Gepsie Metellus, the executive director of the North Miami-based Sant La Haitian Neighborhood Center.

Prime Minister Ariel Henry, who was sworn in after Moise’s assassination, has vowed to disburse humanitarian aid better than after the 2010 earthquake.

Haitian-American social media influencers have used their platforms to steer people to organizations that are Haitian-led or who have deep ties to the community, said Laura Thelemaque, the country director for Hope for Haiti.

“Right now social media is such a driving force,” said Thelemaque, whose organization has worked in Les Cayes for more than three decades. “You just put it on your (Instagram) story and it’s like, ‘Oh, the donate button.'”

The organization has gained close to 4,000 followers on its social media accounts and seen an uptick in donations in the 24 hours following the disaster, she said.

Andre Peck, the executive director of the New York area-based Haitian-American Community Coalition, emphasized the need for mental health care in a religious culture where therapy can be stigmatized.

“Even though they are here physically, I’m sure that they are trying to help family that is in Haiti – so that can cause a lot of mental health burden in a person,” he said.

(Reporting by Makini Brice in Washington; Editing by Andy Sullivan and Matthew Lewis)