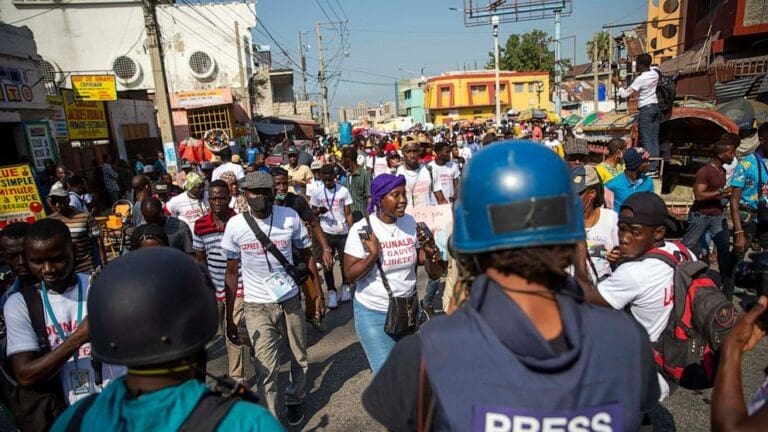 Protestors in Haiti demanding a change in leadership (Instagram)

Haitian activist Monique Clesca, is calling for the Biden Administration and other global powers to allows “Haitians to save our own country” from the ongoing political turmoil that has deteriorated into rampant gang violence.

Clesca, a journalist and former U.N. official, is one of 13 members of the Commission to Search for a Haitian Solution to the Crisis, a group which formed in early 2021, following months of protests against late President Jovenel Moise.

In a new op-ed for the New York Times, Clesca explains both the work the Commission aims to do and the ways in which U.S. support of the political status quo in Haiti has prevented them from enacting a Haitian-led solution to years of political unrest.

Long before Moise’s assassination in July, Haitians had taken to the streets to demand that he leave office, as he had already overstayed his term as president. According to Bloomberg, the consensus among many Haitians was that, since the last elections were held in 2016, Moise’s five year term should have ended in February 2021.

The president maintained that since he was sworn in in February 2017, his term was set to end next year, a position which was supported by the Biden Administration, the UN and the Organization of American States.

Clesca explains that in addition to having overstayed his term, Moise was ruling the country by decree.

“His administration had dissolved Parliament after failing to hold elections, and he had illegally packed the judiciary and electoral commissions,” she writes. “Armed gangs, acting with his support, massacred protesters and terrorized poor and powerless citizens. Government agencies were a shambles, as they have been for years.”

In response, to the worsening turmoil, the Commission consulted Haitians from all walks of life and all political ideologies to begin work on a plan to establish a transitional government that would pave the way for fair and free elections and finally set Haiti on a path out of political instability.

“We can create a free, secure, democratic Haiti on our own,” she says, “but we need the United States and other nations to abandon the status quo and back the work we’ve been engaged in for months.”

Following Moise’s death, Clesca and her colleagues were approached by multiple entities that saw the absence of a clear successor as an opportunity to put the transitional government in place.

Yet as the group activated players representing a multitude of local organizations and political parties, the United States endorsement of Prime Minister Ariel Henry not only stood in direct opposition of the proposed Haitian-led solution; it has allowed Henry to follow Moise’s approach to leadership.

“Mr. Henry, the unelected, de facto prime minister, quickly proposed a rival plan that would consolidate all power of the interim government in his hands,” Clesca explains. “It focuses on quick elections without sufficient reform to make them credible or ensure wide participation. And most of its supporters represent groups that are already aligned with and benefiting from the existing corrupt, predatory and failing system.”

Clesca’s appeal to the international political community is to follow the lead of the Haitian people, rather than to blindly support Henry. That support, she explains is “actually standing in the way of what’s right: letting Haitians save their own country.”

“Haitians need the United States and other countries to shift their support to the commission’s democratic process — in which Mr. Henry is free to participate,” she adds. “The best solution for our country’s complex and overlapping problems is for Haitians to build a more inclusive, stable and nonviolent political system, a functional democracy.”