Halle Berry Admits She Thought about Cosmetic Sugery and More 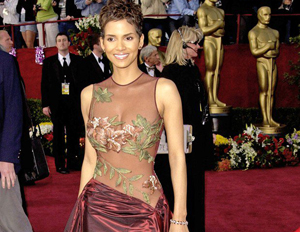 It never seems to matter whether Halle Berry is starring in a box office hit, or strolling under the radar with her daughter and baby boy. The out of sight, out of mind rule may apply to her actress peers who have to keep busy on the big screen in order to maintain relevance, but Ms. Berry proves to be the exception. She’s transcended beyond the status of celebrity and is now recognized as a worldwide icon.

Halle Berry is one of those rare stars whose beauty is just as radiant as her talent, which is why even at 48-years-old we see the Oscar winner on Revlon billboards and TV commercials. In a recent conversation with Bobbi Brown, Editor-in-Chief of Yahoo Beauty and founder of Bobbi Brown Cosmetics, Halle admits to having “bad beauty days” and how she’s even thought about cosmetic surgery. Who knew that the successful and revered beauty had the same off days as every other woman? Here are some of our favorite takeaways from the one-on-one.

Brown pointed out that a number of celebrities were getting work done to change their look and asked Berry how she handled the pressures of being a beauty role model. “It is pressure. When you see everybody around you doing it, you have those moments when you think, ‘To stay alive in this business, do I need to do the same thing?’,” she openly responded. “I won’t lie and tell you that those things don’t cross my mind, because somebody is always suggesting it to me. ‘You know if you just did a little bit of this and that, lift this up, then this would be a little bit better.'” She revealed that she resists the pressure, however, by reminding herself that aging is natural and inevitable. “I just want to always look like myself, even if that’s an older version of myself. I think when you do too much of that cosmetic stuff, you become somebody else in a way.”

The Editor-in-Chief also asked Halle “What do you do on those bad beauty days? Do you sometimes look in the mirror and think, ‘Oh, my God, I can’t take it!’?” Without hesitation Berry said, “There are so many days like that! It depends on what the problem is that I’m seeing.” That’s when the Monster’s Ball actress turns to her cupboard for beauty products. She has a remedy for everything from dark circles to dry skin.

Halle touched on having a blonde-haired, blue-eyed mother and how because of that she was always looking for images of herself. Around 9-years-old, she finally found her reflection in Dorothy Dandridge . “That spoke to me, and that always stayed with me. Like, wow, there she is,” she told Brown.

Before wrapping up, Berry said that she’s learned the most about beauty by simply going along and observing. She experiments with what looks good on her and what makes her feel like her best self.