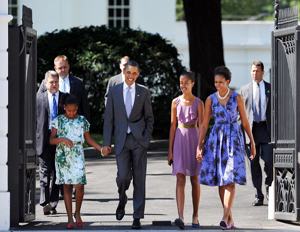 President Obama plans to spend the weekend at Camp David with his family (Image: Getty)

President Barack Obama turns 50 today, but began celebrating the birthday milestone Wednesday in his adopted hometown of Chicago for a Democratic National Committee fundraiser at the Aragon Entertainment Center. In addition to hearing Obama speak, donors who shelled out a minimum of $50, listened as performers, including Grammy-award winning artist Jennifer Hudson, sang “Happy Birthdayâ€ to the commander-in-chief.

Obama has his heart set on a special gift this year. He said his best present would be the return of his oldest daughter, Malia, who’d spent her summer vacation in camp. The First Lady and youngest daughter, Sasha, will also return today from their vacation in Spain. The president plans to spend the weekend at Camp David with his family.

President Obama is only the third president to turn 50 while in office–the other two are Bill Clinton and Teddy Roosevelt.