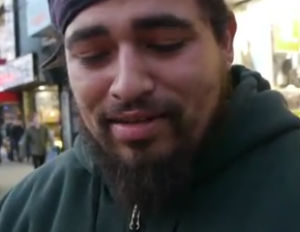 The Harlem Shake was a dance created in the New York neighborhood several years back, but a new version of the movement has recently emerged and the viral dance craze has been picked up from Hollywood’s stars to TVs favorite cartoons: Kendall and Kylie Jenner to Charlie Brown. But while the dance’s continual leg movement and spastic arm motion fascinate many, Harlem residents aren’t as intrigued by the video as much of the general public.

“It’s an injustice; whatever they’re doing,â€ one man said when filmmaker Chris McGuire deiced to go into Manhattan’s Uptown area to get feedback about the dance and accompanying videos. “People on West Fourth Street would do that! Nobody in Harlem would do that,” another man said.

When the Huffington Post spoke with McGuire, he told them, “I actually made a ‘Harlem Shake’ video about five days into the trend. Was probably about the 50th one made. It is called ‘Harlem Shake v420 (Stoner Edition)’. I was trying to get in on the fun. And it was fun.â€

He continued, “Then I began researching it a little bit and discovered that the Harlem Shake was a whole other thing. I learned that it was a long-standing tradition in Harlem, and that what people were doing had nothing to do with it. I wanted to add to the conversation. I felt like someone who had sinned, and saw the error of his ways.