Harlem Shake Video in Australian Mine Costs Workers Their Salaries 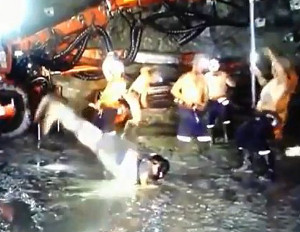 Up to 15 workers at the Agnew Gold Mine inÂ AustraliaÂ were fired after following the new popular trend of filming a Harlem Shake video. Their video, which took place in an actual mine shaft, was posted online and went viral.

Mine owner Barminco fired the men saying the performance underground was a safety hazard; and for breaching the companies “core values of safety, integrity and excellence.â€ The miners have also been banned from working on any sites the company runs at any site “domestically and globally.â€

It’s not clear what safety issues were raised by the performance. In the video, dancing miners wear helmets but some are without shirts which one worker said was to ensure the Barminco name, did not appear in the video. The worker also stated that the miners were only “having a bit of fun.”

Australia is currently experiencing a mining boom, with thousands of workers finding lucrative jobs in remote Outback mines. According to the firm’s website, the Agnew Goldmine producesÂ over 160,000 ounces of goldÂ a year.

Most low-level workmenÂ typically operate on an eight-days on/six-days off rotation, while more senior employees spend seven days below ground beforeÂ a seven-day vacation.Â According to one report, the miners in the video who were fired had six-figure salaries.

A Facebook page has been setup attempting to get the workers re-instated.