Harper Woods Judge Rebekah Coleman Sworn In By Father, Who's Also A Judge 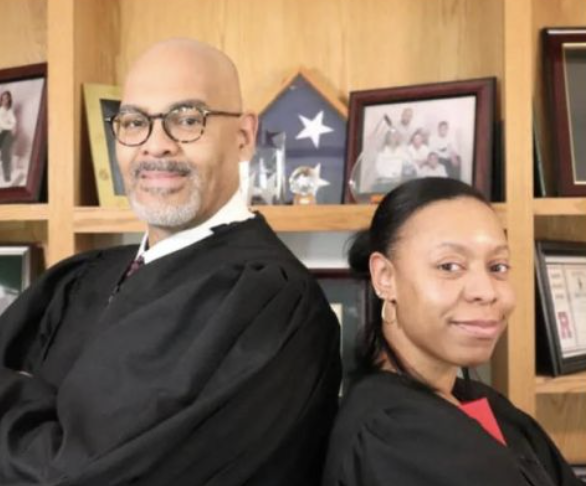 Attorney Rebekah Coleman, a newly-elected judge in the State of Michigan’s 32a District (Harper Woods), had the honor of being sworn in by her father, a fellow judge. Coleman’s swearing-in took place on Dec. 28, according to a statement from court administrator Rachelle Matouk.

“I was able to share this very special moment with my father as he swore me in as Judge of the 32A District Court,” she told The Female Influencer.

Ballotpedia reported that Coleman defeated incumbent Daniel Palmer on Nov. 3 during the general election. She won the seat by 448 votes or 53% majority vote. The newly-elected magistrate will focus on community-based programs, including offering literacy programs, alternative sentencing, legal aid for the civil and landlord-tenant division, as well as drug and sobriety treatment programs for residents.

“We need more community engagement to bridge the gap between the community and the judiciary,” Coleman said in an interview with Harper Woods’ publication C&G News.

“I am very excited to be the next judge of Harper Woods. I plan to bring a lot of positive changes, and I think the city is ready for it,” she explained. “Court is going to be a full-time operation, Monday through Friday.”

Coleman will serve a six-year term as the district’s judge. She began her tenure on Jan.1, according to Ballotpedia.

The 35-year-old lawmaker is a native Detroiter who graduated from Michigan State University in 2007. She obtained her master’s degree in 2014 from the University of Detroit Mercy, and she completed her Juris Doctorate in 2010 at Wayne State Law School in Detroit.

Upon winning the esteemed seat, the tricenarian took to her Facebook page on Nov. 4 to celebrate and thank her supporters.

“Harper Woods, you spoke! You spoke in volumes! You spoke with your votes!  You answered clearly and boldly the call for change,” she wrote. “Thank you for having the courage to go against the status quo and for building the foundation on which the legal system in the City will stand.”

Harper Woods, you spoke! You spoke in volumes! You spoke with your votes! You answered clearly and boldly the call for…

Posted by Rebekah R. Coleman for Judge on Wednesday, November 4, 2020

According to the touching post, Coleman’s mother died 15 years before, and she was also an attorney.

“Mom, I got it done and will continue to live the life that you helped prepare me for before you had to leave us. It has been 15 years, but there is not a moment that you are not missed,” Coleman expressed.

Coleman’s victory is a historical one. She is the first female magistrate to hold the position, and the first Black American judge to be elected in the Michigan city’s 69-year history.