Harrison Ford Defends Use of N-Word in "42" Movie 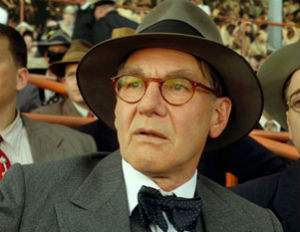 The Jackie Robinson biopic, 42, tells the story of Robinson’s hardships as the first African American to play in Major League Baseball.

In 1947, the Brooklyn Dodgers’ team executive Branch Rickey (played by Harrison Ford), started Robinson at first base and ended racial segregation in baseball.

Audiences will see the trials Robinson went through on his journey to integrate baseball, this includes constantly being called racial slurs including the n-word.

Ford told theGrio.com that the n-word was tastefully used inÂ 42, and was necessary in telling the story of Robinson.

“This is a film about a period of time, and about redeeming that period of time in which it was conventional and common to hear that word and others in characterization of people. The characters that we played worked hard to create circumstances in which that word couldn’t be used, but you can’t make a movie about applesauce without talking about apples,” said Ford.