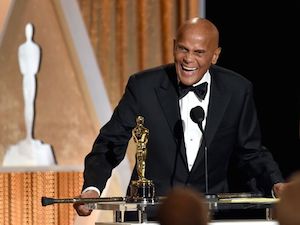 Image: The Academy of Motion Picture Arts and Sciences

Over the weekend, The Academy of Motion Picture Arts and Sciences held their annual Governors Awards event. Legendary activist and actor, Harry Belafonte, received the Jean Hersholt Humanitarian Award and made a declarative speech about race in Hollywood and America.

The performing arts maverick, born in 1927, was introduced by Susan Sarandon and Chris Rock. Awarded periodically by the Academy, the ceremony celebrated Belafonte’s outstanding contribution to humanitarian causes. From his close confidante status to Martin Luther King, Jr. to his outspokenness against the George W. Bush administration, Belafonte reflected on the power of cinema to foment racial tensions within the Black community.

Citing such films as D.W. Griffith’s Birth of a Nation to Tarzan, Belafonte believed that films “were an early stimulus to the beginning of my rebellion.â€ Sir Sidney Poitier, 87, joined Belafonte on the stage and commended him for helping to “redirect the ship of racial hatred in American culture.â€ Also 87, the Harlem, New York native remarks on his life and where he sees Hollywood headed, saying, “I really wish I could be around for the rest of this century, to see what Hollywood does with the rest of the century. Maybe, just maybe, it could be civilization’s game changer.â€

Chris Rock remarked that he “would not be here today if it were not for Harry Belafonte.â€ Meanwhile, Susan Sarandon called him the “ultimate example of a great artist and a lifelong social activist.â€ We here at Black Enterprise regard Harry Belafonte an influential piece of culture that continues to astound and amaze.

Watch his fiery 12-minute speech about race and Hollywood below: