Harvard to Do (Yet Another) Preschool Study 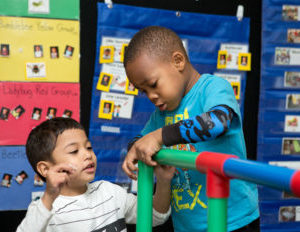 According to recent reports, some very lucky 4-year-olds and their families will soon be part of a Harvard study that aims at improving preschool.

Harvard’s Graduate School of Education received $35 million from the late Saul Zaentz, an Oscar Award-winning Hollywood producer, CBSBoston reports. The donation will be used to conduct the study.

Although pre-K and kindergarten teachers earn the lowest starting salaries at $35,626, as reported by Forbes, the pre-K years are some of the most critical to a child’s learning and brain development. According to Zero to Three, an early child development advocacy organization in Washington, D.C., a child’s brain makes more than 1 million neural connections every second, from birth to age 3. Yet, the U.S. has been accused of neglecting to invest in this critical period by providing free high-quality preschool.

The most famous preschool studies—the Perry Preschool Project, the Carolina Abecedarian Project, and the Carolina Approach to Responsive Education (ABC/CARE)—have already yielded tons of important information that most American families can’t afford to take advantage of.

Although the Harvard study is described as “groundbreaking” and as having potential to affect national policy, without government support that provides access to all children—not just the kids of the affluent—it seems that the vast majority of American preschoolers won’t benefit from the study’s findings.

The ABC/CARE studies enrolled babies at birth and received “care focused on language and cognitive development through age 5, followed by academic support through age 8,” the 74 Million, an education website, reports.

Because the studies were started in the 1970’s and researchers have continued monitoring the children—now adults—they’ve seen the long-term benefits of high-quality preschool.

James Heckman, an economist from the University of Chicago and a Nobel laureate, has tirelessly promoted the benefits of high-quality preschool, particularly for disadvantaged kids. He and his researchers “measured the programs’ effects on IQ, health, income, and criminal activity. They found that access to high-quality preschool yielded an annual return on investment of 13.7%—growth that would elude the savviest money managers on Wall Street,” the 74 Million writes.

Researchers found that boys were particular beneficiaries. Their involvement in criminality was reduced, and their labor income increased. The subjects are now entering middle age.

In the U.S. we’ve had great research; what we don’t have, apparently, is political will. We’re the richest country in the world, but we don’t have the money to put every one of our kids in high-quality pre-K, unlike in the United Kingdom, which acted when it saw the research.

“We value our children less than other nations do,” Arne Duncan, the former U.S. secretary of education, told the Hechinger Report, which around this time last year published a series on public preschools. “I don’t have an easier or softer or kinder way to say that.”

For more information about the Harvard study and to find out how to enroll, go here.