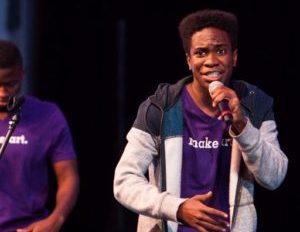 Rather than writing a traditional thesis paper, 20-year-old Obasi Shaw became the first student at Harvard University to submit a rap album as a senior thesis in the English Department. As a result, his creativity and lyricism earned him an A-minus and ensured that he will graduate from the Ivy League school with honors next week.

‘‘I never thought it would be accepted by Harvard,” said Shaw, a native of Stone Mountain, Georgia, a suburb of Atlanta, to The Associated Press. ‘‘I didn’t think they would respect rap as an art form enough for me to do it.”

On the album, Shaw embodies a different character on each track as he raps about a range of topics including police brutality, the Black Lives Matter movement, and slavery.

“Black people in America are kind of caught between freedom and slavery,” Shaw told theÂ Harvard Gazette. “Each song is an exploration of black liminality, that state between slavery and freedom.”

Shaw said he found inspiration from old English literature and the literary work of James Baldwin. His thesis adviser, Harvard English lecturerÂ Josh Bell, praised the album for its academic and artistic quality.

“Obasi’s album is very interesting because it uses Geoffrey Chaucer’s ‘Canterbury Tales’ as an intellectual overlay,â€ said Bell to the Harvard Gazette. He “is telling stories in each song from different points of view, and it’s critical of American society and racial politics. But above all that, it’s a fun and interesting album,â€ added Bell.

Although Shaw may have dreams and the potential to pursue a career in music, he plans to begin working as a software engineer at Google this summer.

Take a listen to “Liminal Minds” below.