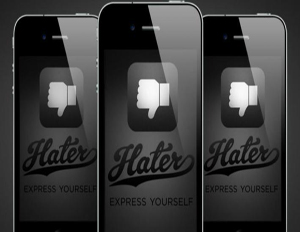 Jake Banks has created the one option most social media users have desired since Facebook unveiled the “likeâ€ button in 2010. The Hater app, which launched at this year’s South by Southwest (SXSW) Startup Village, is available for download in the App Store, and currently has around 40,000 downloads and 20,000 daily users.

In the “likeâ€ this, “likeâ€ that day in age, Banks wanted to give social media users an alternative to be themselves and vent if they so choose to. “If social networks are a true reflection [of] our sociality, we need an outlet for dislikes and things we hate,â€ says the advertising-executive-turned —tech-entrepreneur.

So, you’re probably wondering, what exactly Hater allows users to do? The free iOS app lets you take a picture or upload a photo from your smartphone, share it to the Hater community (with a caption), view a feed of other posts people are “hating onâ€ in the Hater community, and weigh in. Hater app users have the option to pull an image of something they hate from another website and post to the app using an alter ego. You can also sign in using your Twitter or Facebook information.

The social media platform, which looks a lot like Instagram, allows you to peruse through popular hates, which today is comprised of numerous selfies, a picture you take of yourself; traffic, long lines, cold coffee, and Kim Kardashian’s most recent duckface pout, among other pictures depicting annoying daily occurrences or social concerns.

While the app gives users the opportunity to “hateâ€ whatever they choose, it is not designed to bash or cyberbully people on or outside of the Hater community, but Blake is aware it could happen and will deal with each case accordingly.

“Of course there will be mean spirited-attacks,â€ says Banks. “Bullys…that happens everywhere, from the bus to the office, that’s part of human nature. We will deal with it and highly monitor the posts, and delete and hold the users accountable for their posts.â€ The terms and conditions outlined before you sign up, clearly outlines that cyber attacks and harassment are not acceptable on the network.

Hater App Inc. has several plans in the works from Android and Microsoft versions that will be available in the coming months, to a YouTube channel and an apparel line. To download the app, or get more information on it, visit the Hater app website.