Have Lunch With Apple's CEO (If You Can Afford It) 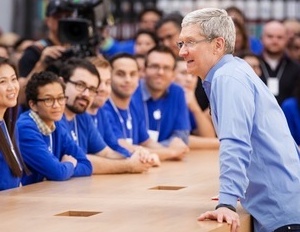 But you can buy lunch with Apple CEO Tim Cook, if you’ve got enough cash.

Charitybuzz, an online auction site where proceeds go to various charities, is holding an auction with Tim Cook as the prize. The Apple CEO, who just announced a $10 billion profit this quarter, is donated an hour-long lunch to the highest bidder.

All proceeds from the donation go to the nonprofit Robert F. Kennedy Center for Justice and Human Rights, founded in honor of the late Senator.

If last year’s auction of Cook’s time is any indication, he’ll have no trouble raising the funds. The 2013 Charitybuzz auction was won by a mystery bidder who dropped $610,000 for the opportunity to grab a bite with the CEO.

Here’s the bio on Charitybuzz’s site of Cook: “Tim Cook is Apple’s CEO and serves on its board of directors. In 2012 he was named a runner-up to TIME’s Person of the Year and topped Vanity Fair’s New Establishment list. Before being named CEO in August 2011, Tim was Apple’s Chief Operating Officer and was responsible for all of the company’s worldwide sales and operations. He also headed Apple’s Macintosh division. Tim earned an MBA from Duke University, where he was a Fuqua Scholar, and a Bachelor of Science degree in Industrial Engineering from Auburn University.”

Want to take a shot and bid for lunch with one of the most powerful men in business? You’ve got 18 days left.