Priced Out, It's Time For HBCU Athletics to Focus on Values 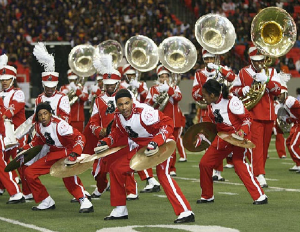 The Annual Honda Battle of the Bands Showcase (seen here in 2010) is one of the true gems of HBCU culture.

On Tuesday, an ESPN.com report surfaced detailing that non-football playing members of the Big East could potentially join non-football members of the Atlantic-10 to form a super basketball conference. No one was surprised — not even Fake Mike Wilbon. After all, it was the latest in a spat of financially-based decisions that promises to forever alter the landscape of major college sports. With schools moving from one conference to another almost weekly, there’s plenty for Historically Black Colleges and Universities to learn from.

Learn how rapidly the big business of college athletics can change the status quo? Seems obvious enough. Learn how expensive and taxing it is to field a top-notch athletic program? Sure, why not. But whatever lessons remain, the shift should serve as something else altogether: motivation. To become better. To become smarter, more efficient stewards of the universities’ resources. Otherwise, the only choice is to scale back, stay afloat and be a mirror for an NCAA system marked by corrupted elements, corporate greed and exploitation.

Just last week, the University of Louisville broke away from the Big East to join the Atlantic Coast Conference in all sports. Other shake-ups have included mid-majors like Old Dominion, Villanova and Georgia Southern, all moving up to a major conference in the next three years. Naturally, it started a faint buzz that the wheels should begin turning for HBCU programs wishing to move up from the Football Championship Subdivision to the more prestigious Bowl Championship Series, previously known as Division I-A.

Only, that would prove to be a grave mistake.

The reality is that black Colleges don’t have the resources to compete with the Louisville’s, Syracuse’s and even the Virginia Commonwealth’s of the sports world. You’ll remember that Florida A&M, one of our great academic and athletic institutions, in 2004 attempted to move up to Division I-A. The experiment was short lived. Rattler programs had arguably their worst year across the board. The reason was partly because in order to get the best athletes, you need the best facilities. And to have the best facilities you have to have money, the almighty dollar, mula, mean green, cream. It makes the world go round. And it takes a lot of it to run a college program, according to the USA Today Sports’ College Athletics Finances Database, many programs run on a budget in the hundreds of millions of dollars. In the case of FAMU, it simply didn’t have enough to compete.

Budget constraints were a large reason that Spelman College recently decided to discontinue their athletic program in favor of a comprehensive wellness and fitness program for all of its students. The reality of the economy forced Spelman to make that decision, one many other HBCUs will face soon if they do not balance academic and athletic funding soon.

It doesn’t help that many black colleges, especially state institutions, get the short end of the stick in terms of budgeting from state government, making it difficult to compete on all levels, especially athletics.

During my time as a sports reporter for a newspaper chain in Delaware, I asked our government reporter what the budget was set aside for the University of Delaware. The reporter said the figure was 111 million dollars. Then, I asked for the number for Delaware State University, the state’s only HBCU. That number? Only $32 million.

One thing black colleges are known for is a close-knit atmosphere with an intimate nature on all fronts, from class size to student activities to athletics. It’s built into the fabric of what the institutions are all about. While the major college conferences continue to play musical chairs, Black College Athletics should sit this dance out and create their own niche without having to go broke to do it. The wealth of our institutions have little to do with money.

A proud graduate of Delaware State, Chris Stevens is a writer and podcast host based in Wilmington, Delaware. Follow him on Twitter @CJStarchild or visit his website, http://www.chrisstevenssite.com.