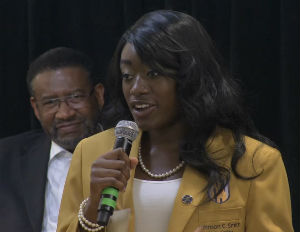 Hajira Attah, a junior at Johnson C. Smith University with a 3.3 GPA, is confidently looking ahead to a bright future in law and education. She, along with several other students attending historically black colleges, was selected to visit the Bill & Melinda Gates Foundation in February.

[Related: HBCUs Invest in Students and Get Results]

But just a few years ago, things looked bleak for Attah. Her high school GPA was 1.7–not because she wasn’t bright, but because family issues and other distractions caused her to “lose her way,â€ as she put it, from being the high-achieving student she’d been in middle school.

Her sole contact with her high school’s single adviser occurred when she informed Attah that she would not be graduating on time.

“That was my wake-up call,â€ Attah says.

So Attah took night classes and handed in assignments on the weekends; however, in a sense it was too late. Her GPA was impossibly low, and she could take the SAT only once. She applied to eight State University of New York schools: All rejected her.

Through a friend, Attah learned about the You Can Go to College Committee, which provides tours of HBCUs. The only problem? The $450 price tag–Attah didn’t have the money, and neither did her parents. Still, she was undeterred.

“I couldn’t let my parents down,â€ she says. “I have six brothers who all look up to me. I had to keep persevering for the sake of my family name. My father came to this country to have a better life–I couldn’t break my dad’s heart like that.â€

So Attah went to her teachers with a manila envelope and asked them for the money. “I raised all the money I needed, including for food and other expenses.â€

The tour visited 11 HBCUs. Attah was accepted on a contingent basis to several, including Johnson C. Smith, which had a special program for students like Attah with low grade point averages.

Unfortunately, that program, Biddle Institute, rejected her as well. But that year Johnson C. Smith was beginning a new program for students rejected by Biddle: Sit Lux, Latin for Let there be light.

“What is so beautiful about this program is that they don’t look at your SAT or GPA at all,â€ says Attah. A questionnaire asks about leadership skills, family background, and education history; in a series of mini interviews you’re asked about your commitment to education, resilience, and academic achievements.

You Can Go to College had helped Attah prepare an academic portfolio, which she took on all four interviews. She was accepted into Sit Lux.

The one-year intensive helped Attah get back on her feet. Eight of the original 14 Sit Lux scholars are still at Johnson C. Smith and thriving.