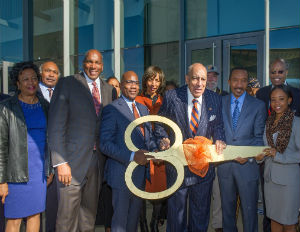 In last week’s oral arguments before the Supreme Court in the Fisher v. University of Texas case, Justice Antonin Scalia stunned many when he seemed to suggest that black students should go to “lesser” schools.

[Related: The Common Black College Application: What You Need to Know]

Widely assailed for what some saw as racist rhetoric, including Senate Minority Leader Harry Reid, who was quoted as saying “the only difference between the ideas endorsed by Scalia and Trump is that Scalia has a robe and a lifetime appointment.â€ Scalia’s comments apparently alluded to historically black colleges.

It is somewhat ironic that the Supreme Court Justice would utter his comments the day before President Obama would sign the Every Student Succeeds Act into law. Calling it a civil rights law, the president authorized the latest iteration of the Elementary and Secondary Education Act, originally signed into law by President Lyndon Johnson. The law’s intent was to create equal educational opportunity–particularly for students who had been denied it.

But despite the progress made under the Obama administration, there remains gross inequity in education that falls stubbornly along racial lines. And that’s why we still need affirmative action at schools like the University of Texas, and we still need HBCUs.

New York Times writer and reporter Nikole Hannah-Jones wrote so powerfully about the work of Xavier College, an HBCU that sends more black students to medical school than any other school in the nation. In her piece, she describes how Xavier admitted a student who graduated second in his class, yet struggled at Xavier because of how poorly his Chicago high school had prepared him. The piece explains in detail how Xavier took a bright, motivated, but under-prepared student, and supported him until he succeeded–which for this student meant being accepted to medical school.

Is Xavier a “lesserâ€ school?

The only thing “lesserâ€ here is the educational preparation the vast majority of black students receive in this country. That needs to change now, and if ESSA can be implemented thoughtfully and with the best interests of the country in mind, then the day will soon come when Â all students in the U.S.–regardless of zip code or neighborhood or school district–will receive a world-class education that prepares them for college or the workplace without remediation.

Here’s more about the value of historically black colleges—from Earl G. Graves Sr., a graduate of Morgan State University, founder of Black Enterprise, and its chairman and publisher. –RWG