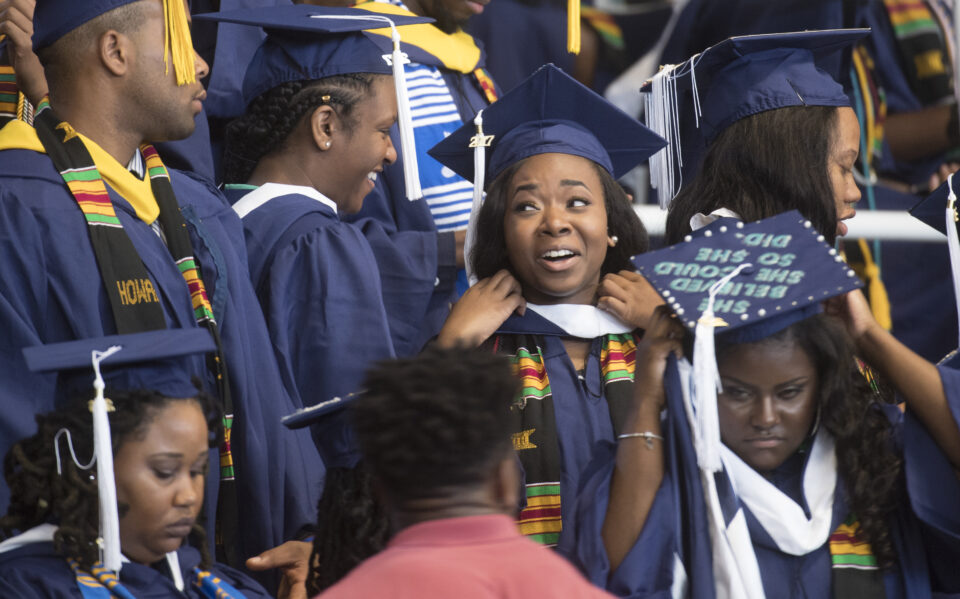 WASHINGTON DC - MAY 13: Angel C. Dye (center) was able to receive her undergraduate degree from the College of Arts and Sciences thanks to donors who stepped in to help. Dye celebrates on the campus of Howard University in Washington, DC on May, 13, 2017. In 2016, Angel Dye was trying to pursue her Howard University education, but like scores of other students at the prominent, financially strapped HBCU, she owed thousands, and had been kicked out of her dorm room and still took classes on the down low. A year later Dye receives her degree today, with the help of donors who read her story and is headed to graduate school. (Photo by Marvin Joseph/The Washington Post via Getty Images)

Several HBCUs are experiencing a significant increase in the number of Black students applying and enrolling, reversing years of declining numbers.

“The percentage of Black students enrolled at HBCUs fell from 18% in 1976 to 8% in 2014 and then increased to 9% in 2020,” according to The National Center for Education Statistics. According to Data USA, HBCUs such as Morehouse College in Atlanta have seen a 60% increase in applications in 2020 from the previous year, NPR reported.

The increase in applications and enrollments at HBCUs stems from a number of things. For starters, many Black parents and students see a safer environment at HBCUs where Black students and culture are the priority.

Many incoming students are also following the lead of Black politicians, celebrities, doctors, and lawyers who have graduated from HBCUs. The Black Lives Matter movement and the focus on social equity have also led to more Black Americans spending their money on a Black-focused education for their children. HBCUs are also cheaper than predominately white institutions (PWIs).

Sherrille McKethan-Green, whose son Gideon Green will attend Morehouse this fall, told NPR going to an HBCU will be a different experience for her son that he may never get again.

“I felt that after he graduated from college, he would have time to be a minority, but at Morehouse, he would be a majority,” McKethan-Green said.

HBCUs are paramount to the educational success of Black Americans. They produce almost a quarter (23%) of all Black college graduates. Eighty percent of Black judges graduated from HBCUs. According to The Cleveland Council of Black Colleges Alumni Association, more than 50% of Black public school teachers and 70% of Black dentists and physicians earned degrees at HBCUs.

The skyrocketing enrollments have created housing issues on some HBCU campuses.

Florida Agricultural and Mechanical University (FAMU) currently has no on-campus housing left for incoming students and has been forced to assist students who have to find places off-campus and approved a proposal to acquire duplexes and condos to use for student housing. Local realtors have also stepped in to help FAMU students find apartments.

Morgan State University, a Baltimore-based HBCU, unveiled a new residence hall for this fall and announced another will be built for 2024.