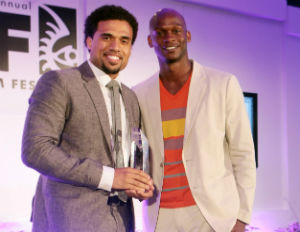 The second annual release of the Hollywood Diversity Report by UCLA’s Ralph J. Bunche Center for African American Studies, reveals what many know. The numbers of minorities of color and women represented on TV, Film, and behind the camera are abysmal in a country where the population is about 40 percent minority. The study, focused on 2012 and 2013, shows that in movies, minorities were underrepresented more than 2-to-1 (less than half as much as their share of the U.S. population) in lead roles and directors positions. When it comes to ratings, the study showed that the highest rated shows were the most diverse. In broadcast scripted shows, 41 percent to 50 percent of the most diversely cast scored the highest ratings in black and white households. But when it came to diversity among Hollywood executives, the numbers were the lowest. Executives of TV network and studios were 96 percent white and 71 percent male. For major studios executives were 94 percent white and 100 percent male. Backed by multiple studios like Time Warner and the Walt Disney Company, the Hollywood Diversity Report has led to initiatives to make change, like the creation of HBOAccess, a mentorship program for diverse writers and filmmakers.

Dennis Williams, HBO’s Vice President of Corporate Social Responsibility helps continue HBO’s track record in championing diversity. With a team dedicated to helping HBO use its platform to elevate social issues, Williams points out that the goal is about the future. “The strength of HBO from its inception is defined by our ability to separate ourselves form others. Part of that is we always invite storytellers and content creators whose stories would not or couldn’t have been told, seen or shown in other arenas or places. That desire to be inclusive became a part of the HBO DNA,â€ says Williams, who’s been in his role with HBO since 2010. “So it makes sense then for us to find the [American Black Film Festivals] ABFF’s and to be at the Latino film festivals, to be at the forefront of the LGBT festivals that we can support. To be at the forefront of what the entertainment industry can benefit from. It’s both very philanthropic and altruistic. But in some ways it’s about self -preservation. The future of our brand depends on our ability to continue to attract the best and the brightest storytellers and content creators that differentiate us from everyone else.â€

For the past 18 years, HBO has sponsored the American Black Film Festival (ABFF). Championing ABFF’S 19-year-old brand as the premiere black film festival in the country, HBO’s partnership is a key factor in its goal of inclusion. “We’re still with ABFF because we are a premium brand and we look to partner with like entities. If you go back historically and ask why did HBO get involved, it was a group of HBO executives understanding that we are in this unique position to support diversity in this industry. And the way to do that is to find the next generation of diverse filmmakers and to nurture and cultivate them,â€ says Williams of HBO’s ABFF support, which also includes a continued sponsorship of ABFF’s Short Film Competition and this year’s Comedy Wings Competition. “Festivals like ABFF allow the creativity of our community to have a home. So for me, ABFF is like home to emerging and now established black talent. You’ll see people come back again and again and say, ‘Even though I’ve ‘made it,’ I want to show this piece of content in this environment because this audience will welcome it and understand it. And I can go out with the confidence that I need knowing what I have done is great.’ I think we need that and it’s vital and important for us as an African American community. And what we send out to the rest of the industry are people and content creators and storytellers who can accurately reflect the experiences of the African American community in ways that will resonate and connect with all. So the industry is made better by that.â€