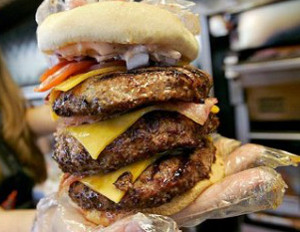 For the last year and a half, John Alleman has served as the unofficial spokesman for the Heart Attack Grill. Last week, he suffered a massive heart attack and was rushed to the Sunrise Hospital, where he was on life support until he passed away this morning.

On the restaurant’s Facebook page, the following statement was posted: “For the past 18 months if you happen to walk by the Heart Attack Grill you were probably approached by our new spokesman John Alleman. So colorful was John’s sales pitch that we placed him on the cover of our menu. He was so popular with the customers that last summer we gave him his own “Patient John” clothing line on our website. John truly loved HAG and would spend hours every day getting the word out to anyone who would listen.â€

The Heart Attack Grill is a Las Vegas based eatery with a hospital theme. It’s known for its over-the-top burger creations such as the quadruple bypass burger, which holds the Guinness World Record for “most calorific burger,” weighing in at 9,982 calories. In one promotion, customers over 350Â lb eat for free if they weigh in with a doctor or nurse before each burger.

Heart Attack Grill owner Jon Basso makes no apologies for the unhealthy nature of the food his restaurant serves. In an interview with Eater.com a year ago, he stated: “I don’t tell anyone to come to the Heart Attack Grill more often than once a month. I say it right in the door, ‘Caution this establishment is bad for your health.'”

Jon Basso says Alleman was never the official spokesman for the restaurant and therefore was never paid for encouraging visitors, but would occasionally get free food. Basso also says he warned Alleman about eating at the restaurant.

“I told him if you keep eating like this, it’s going to kill ya.â€