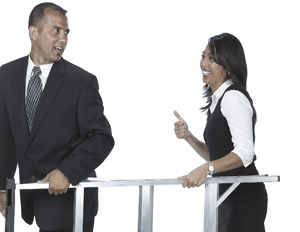 Is it a bird? Is it a plane? No, it’s helicopter parents.

The helicopter parents are landing at companies everywhere. They chaperoned on field trips in elementary school, tirelessly fought professors in college, and they’re now showing up to work. You know them. You may even have them.

These parents, constantly hovering over their offspring—hence the word “helicopter”—have sparked much debate, and their influence has been hugely evident with millennial workers.

According to NPR, helicopter parents are writing and sending their kids’ resumes, joining them for interviews and even negotiating salary and benefits. No joke.

Michigan State University surveyed more than 700 employers seeking to hire recent college graduates. Nearly one-third said parents submitted resumes on their child’s behalf, some without even informing the child. One-quarter reported hearing from parents urging the employer to hire their son or daughter for a position. Four percent of respondents reported that a parent actually showed up for the candidate’s job interview.

As the job market becomes increasingly tough, more parents and their 20-something sons and daughters are struggling with the question of how much help is too much. While it’s perfectly understandable for parents to want their child to succeed, too much hovering can inadvertently ruin search leads and job prospects.

How to tell if you have a helicopter mom or pops:

Has your dad ever accompanied you to an interview or job fair?

Does your mom still send you wake-up calls at 6 a.m. to make sure you get to work on time?

Do you call your parents five times a day from the office?

How to avoid these “Take Your Parent to Work” Days:

Have clear-cut boundaries about your professional life with your parents.

While it’s acceptable to seek advice, take responsibility for your own career strategy.

Don’t be afraid to fail or change your mind. Making your own decisions and accepting the consequences will only strengthen your judgment and independence.