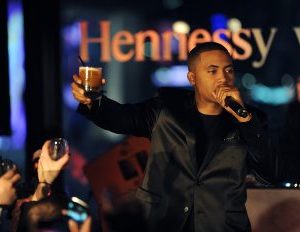 “Fab 5â€ Freddy Braithwaite discusses Hennessy’s ascent to becoming a fixture of hip-hop culture in Hennessy: A Toast to the World’s Preeminent Spirit,Â a new coffee table book that explores the brand’s 250-plus year legacy. Featuring classic cocktail recipes, never-before-seen imagery from Hennessy’s archives, and interviews with cultural luminaries including Olympic medalist and Jesse Owens mentee, Herb Douglas, on becoming the “The Godfather of Hennessy’s African American Community.â€ Hennessy: A Toast to the World’s Preeminent Spirit will be available beginning Feb. 14, 2017.

In the book, rapper Nasir “Nasâ€ Jones discusses his 25-plus year love affair with Hennessy. In fact, 2016 marked the fourth year in a row that the record producer, entrepreneur, and venture capitalist officially worked with Hennessy. He was a significant part of the award-winning “Wild Rabbitâ€ campaign, centered on the theme of pushing the limits of one’s own potential. Tagline: “Never stop. Never settle. Over the last five years, Hennessy’s campaign has highlighted cultural icons, those that constantly push themselves to the next level; past faces of the campaign include songstress Erykah Badu and award-winning filmmaker Martin Scorsese.

A vibrant brand with a very loyal following, few know the full story of Hennessy Cognac’s history, craftsmanship, and family legacy–or how the brand has become so embedded in today’s lexicon of pop culture. Hennessy has evolved over time–touching everyone from African American and hip-hop communities to some of the world’s most prominent artists and artisans. From 1960s ad executives, literally the real life Mad Men, to the most cutting-edge creative of today, Hennessy cognac has a deep and enduring place in American culture, something the book explores in-depth, notes a press statement.

An Unexpected History: The Story of Hennessy and African Americans, a film that premiered at the 2015 American Black Film Festival, celebrates Hennessy’s 100-year relationship with African American culture, as well as the role of African Americans in shaping the brand’s identity and the role of Hennessy in bringing opportunities to black professionals. Hennessy has a long-standing support of African American social justice initiatives dating back to 1896 as one of the founders of what would become the National Urban League, providing sponsorship for the Tuskegee Institute, and (in 1909) serving as the NAACP’s first corporate sponsor.

What’s more, Hennessy’s VSOP PrivilÃ¨ge Awards has been recognizing accomplished African American individuals for 13 years now. Past honorees include Spike Lee, Magic Johnson, Patti LaBelle, Daymond John, and most recently Hill Harper. “Historically, we have given it to an outstanding person who has shown mastery of his or her professional craft in addition to finding real and impactful ways to give back to the community,â€ says Rodney Williams, chief marketing officer and executive vice president, brands at Moet Hennessy North America.