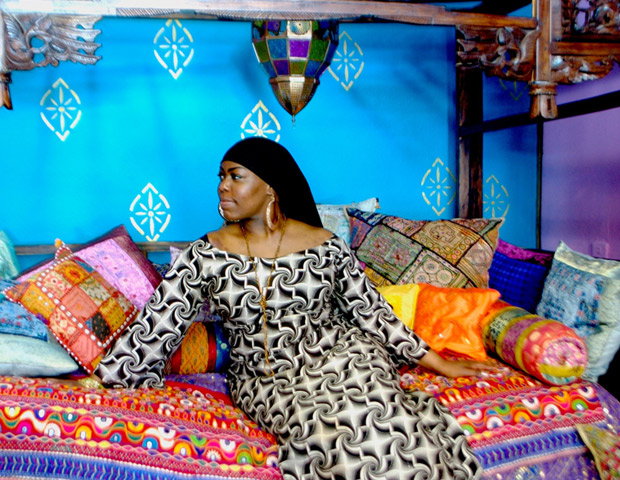 Laylah Barrayn is living proof that sometimes, if you want something done, you have to do it yourself. The New York City-based teacher and photographer got the idea for a visual celebration of female wordsmiths in 2008. Three years later, she unveiled Her Word as Witness: Women Writers of the African Diaspora, which Barrayn made happen with most of her own resources.

The photography exhibit, which is currently on display in Brooklyn at Restoration Plaza’s Skylight Gallery, Â celebrates female writers across different genres, who have impacted pop culture with their words. Among the women Barrayn photographed are poet Sonia Sanchez, author Demetria Lucas and former Essence Editor-in-Chief Susan L. Taylor. It’s Barrayn’s way of paying homage to the women she says inspired her, as well as several other creative women.

Opened on December 1, 2011, the exhibit will run through March 31 in Brooklyn before eventually traveling around New York City and to other City’s across the United States. BlackEnterprise.com caught up with Barrayn to talk about why this series is so important to her and how she kept going even when finances weren’t always on her side.

What inspired you to put Her Word as Witness together?

I’m really happy that I finished it because I just had this idea walking around in my head longer than it’s actually be done, so I’m still getting used to it being manifested. It’s a visual love letter to a lot of the writers that I admire and that I’ve read that have connected with me through my writing. They’ve inspired me and made me feel that everything is okay or that everything is going to get better and they have helped me validate my own self. They’ve influenced me through their words so much just by writing about their own lives or offering their perspectives through writings, and it’s been such a enrichment to my life that I had to pay tribute to them. And being in New York and with most of them living in New York, I really felt the urgency to do it so I set out on this journey and I made portraits of these women writers, and the writers are across all genres. They’re reporters, essayists, poets and song writers and I wanted to pay tribute to these women and also look at this community of writers in a different way and my different way would be to mix the genres up.

People have taken to the exhibition in a very positive way. I had someone tell me the exhibition was mind-blowing. That really made me feel great because I worked so hard and I put so many hours and months into this. I mean, I really sacrificed everything for this show, and it was just me. I went around edited, developed and came up with the idea. I was a one-woman show and I worked very hard, so I’m just really happy that everyone appreciated the show. I did the show when I was working part-time. I was in school part time as well, so I was really happy that people appreciated it, because I had many sleepless nights and having to give in papers late because I had to edit the photos.

Speaking of your hard work; what steps did you take to put the project together once you decided to move forward with it?

I got the idea in 2008, even though I had a vague concept for what I wanted to do for a very long time. I finally solidified it as something I wanted to do in August 2010. I went up to a few writers asked if they would be interested and they were. I had no gallery. I had nothing. I just told them I want to do this so I applied for a grant and I got rejected because I gave them a list of all these big writers like Toni Morrison and Edwidge Danticat, and they rejected me. When I called up the grant people–because you can call up and see what the notes were on your panel–they said they rejected me because they didn’t think I had access to these people. They were like, “Edwidge Danticat just won the MacArthur Genius Award, do you think that you could have access? Are you really going to be able to shoot this person?â€ So they rejected me but I just went ahead and started shooting.

How did you get from idea to exhibiting in the Skylight Gallery?

I had heard about Skylight Gallery because I lived in the neighborhood and I had a friend that had a show there, so I told her that I wanted to do a show there and asked what I needed to do and she gave me the email for this one curator. They looked at the proposal and they loved it so they put me on the calendar. Then, I started shooting more and I just went down the line. I had a list of about 80 people and I started contacting them and then I started cutting the list. I just wanted a real solid group and so I got the list down to 40 people and I called most of them. I shot most of the people I wanted; but I also wanted Sonia Sanchez and I didn’t know how to get in contact with her but I knew that my friend April Silver of Akila Worksongs knew her so I told her about the project and she connected me with Sonia. And there was another writer I wanted that I didn’t think I would get; it was Susan Taylor. I asked April if she knew her and she did and she connected us. Those were the last people I shot and then the project was done.