Herbert Carter, One of the Original Tuskegee Airmen, Is Dead at 95 - Black Enterprise 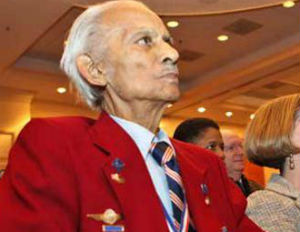 Herbert Carter, one of the original members of the pioneering all-black fighter pilot squadron, the Tuskegee Airmen, died on Thursday, according to the Associated Press. He was 95.

After being admitted to the Army Air Corps, they were prohibited from fighting alongside white counterparts and faced severe prejudice, yet went on to become one of World War II’s most respected fighter squadrons, successfully escorting countless bombers during theÂ war.

A fictionalized version of the Tuskegee Airmen’s story was depicted in Red Tails, a major Hollywood movie produced by George Lucas. Carter was on hand for the movie’s opening.

“It’s a wonderful feeling that finally there is some recognition that’s being done in a manner that is credible to the Tuskegee Airmen,” Carter he said at theÂ time.