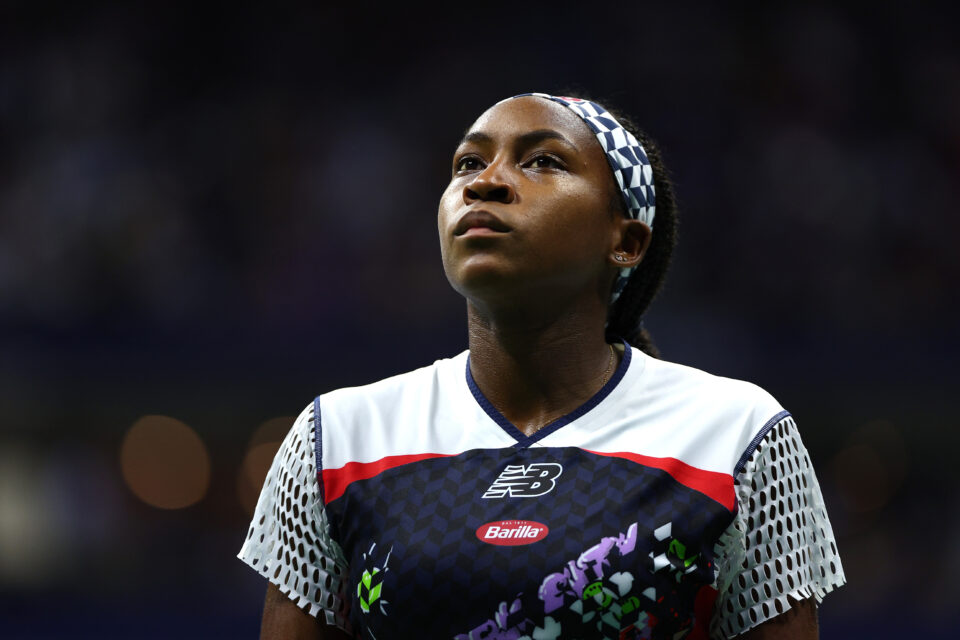 NEW YORK, NEW YORK - SEPTEMBER 06: Coco Gauff of the United States looks on against Caroline Garcia of France during their Women’s Singles Quarterfinal match on Day Nine of the 2022 US Open at USTA Billie Jean King National Tennis Center on September 06, 2022 in the Flushing neighborhood of the Queens borough of New York City. (Photo by Elsa/Getty Images)

On Tuesday Sept. 6, the young tennis phenom may have lost her match against Caroline Garcia of France in New York, but her 2022 season has been nothing short but spectacular.

According to Forbes, the 18-year-old’s victory against Zhang Shuai on Sunday at the U.S. Open marked her becoming the youngest American quarterfinalist at the U.S. Open since Melanie Oudin in 2009.

During the final game of her match, Gauff recalled how it felt to hear the audience at Ashe Stadium cheer her on.

“It feels insane, I mean Ashe Stadium chanting my name,” she said on court at the time, per the outlet. “I was trying not to smile on the bench on my last changeover. I was trying to stay in the moment, in my head I was smiling. I can’t believe you guys were chanting like that. It’s crazy.”

The quarterfinals run also garnered the Georgia native with more major ranking milestone. She will be crowned the youngest woman to debut in the Top 10 since 17-year-old Nicole Vaidisova in 2006, per the Women’s Tennis Association (WTA). She will also be the third American to kick off her Top 10 debut this season. The rankings will be updated on Sept. 12.

Remarkably, Gauff also stands as the youngest American to reach this high ranking since Serena Williams achieved it at age 17 in 1999. The winning continues with Gauff earning the WTA World No.1 Doubles Ranking in August. This feat made her the second-youngest player in history to achieve the high ranking.

From winning her first Grand Slam final at Roland Garros to becoming a semifinalist of the WTA 250 Adelaide International and WTA 500 bett1open (German Open) in Berlin, Gauff’s list of triumphs go on.

As BLACK ENTERPRISE previously reported, Gauff is also reigning as the only active woman tennis player to have her own signature shoe. Just in time for the US Open, New Balance announced its partnership with the teenager in releasing its latest sneakers, Coco CG1.