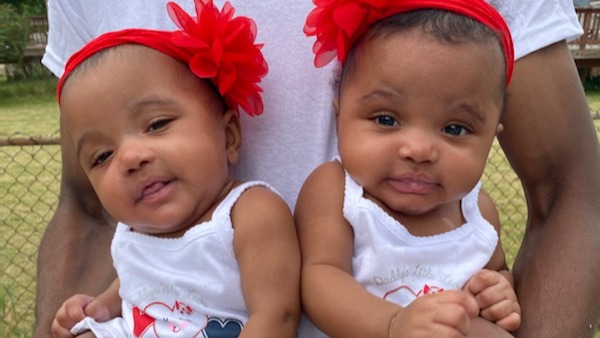 A bigger tragedy was averted when a Michigan man ran into a burning house to save his infant daughters while suffering severe burns in the process.

According to People, on Friday, July 16, 23-year-old Ray Lucas of Eastpointe, Michigan, had left the home with his girlfriend Shi’Ann Brown, the mother of his 18-month-old twin daughters, Malaysia and Milan, to run an errand. When they returned, they saw that the house was on fire.

“The house was engulfed in smoke, I saw my mom and my niece were standing at the door and they were frantic,” Lucas told Fox 2 Detroit, knowing that his twin daughters were still inside. “I just knew I had to get my babies out,” he said. “That’s what went through my mind.”

Lucas had also stated that he “really only found my babies due to my memory, just knowing where they were and knowing how to get to them – just from having that same route.”

Lucas got his daughters out in time but the girls had to spend time in the ICU (Intensive Care Unit). Malaysia was left with severe burns but is out of the hospital and her twin sister Milan suffered some smoke inhalation and second-degree burns.

Lucas was also injured as he was severely burned while recusing and saving his daughters. He has sustained 2nd and 3rd degree burns to his face, eyes, neck, arms and other parts of his body in additional to smoke inhalation.

A GoFundMe has been started for the family.

“Friday night July 16, 2021 started as any other night for Ray Lucas and Shi’Ann Brown, the 23 year old parents of twin girls, ages 18 months. Little did Ray know that he would be engaged in a fight to save the lives of their twin baby girls? Malaysia and Milan were at home with family when an electrical fire started in the basement and soon engulfed the entire house. Some family members were able to escape but the babies were still trapped in the house.”

“Please help us to Bless this young man, the babies and their mother Shi’Ann so that they may secure a new home, and restore and furnish a new home environment for the family to live. With such things like furniture, baby beds and baby furniture, in addition to diapers and clothing for both of the twin babies and clothing for the baby’s mother and the father. Funds are also needed to go towards medical bills and expenses. Shi’Ann had valuable family Heirlooms that can never be replaced that were also lost in the fire.”