Hero on Paris-Bound Train a Senior at Cal State 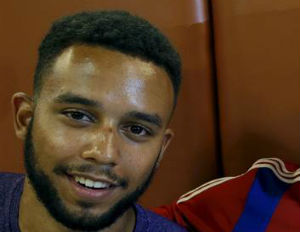 Anthony Sadler, a senior at Cal State University Sacramento where he is a member of the Philosophy Club, joined his friends Alek Skarlatos and Spencer Stone, both U.S. servicemen, as they tackled an attacker on a high-speed train in France. Sadler was on a European vacation with his buddies–the three have been friends since childhood–not expecting to be hailed as a hero for helping to subdue a gunman, and certainly not expecting to speak with President Obama or be awarded the Legion of Honor–France’s highest honor.

For more on the story, here is an excerpt from the New York Times:

By May, it was decided: Three friends who met as middle-schoolers in California would take a European vacation.

“I’m going to Europe. Like wow,â€ Anthony Sadler, 23, wrote on Twitter on May 14, three months before jetting off with Alek Skarlatos, 22, and Spencer Stone, 23.

On his first international trip, he planned to spend three weeks traveling across Italy, Germany, the Netherlands, France, and Spain with Mr. Skarlatos and Mr. Stone, two of his closest friends, both of whom are in the Armed Forces. Mr. Skarlatos is a specialist in the Oregon National Guard; Mr. Stone is an airman in the Air Force.

Meals and sightseeing were part of the itinerary. Disrupting an act of terror was not.

But on Friday, they did just that, tackling and subduing a gunman on aÂ high-speed trainÂ to France. The next day, their faces were on televisions around the world, and they were being hailed as heroes.

The three friends had planned to spend Friday night in Amsterdam, but changed their minds at the last minute and took a train that day headed to Paris, Mr. Skarlatos’s father, Emanuel, told The Oregonian newspaper.

Mr. Sadler, a college student in Sacramento, and Mr. Skarlatos had come to meet with Mr. Stone, who is stationed in the Azores Islands near Portugal. Mr. Skarlatos, who returned to Oregon in July after a nine-month deployment in Afghanistan, left for Europe on Aug. 11. Mr. Sadler followed the next day. On Monday, Mr. Sadler wrote in a response to a comment on a Facebook photo that he was going to Amsterdam, Paris and Barcelona, after having visited Rome, Venice, Munich, and Berlin.

They were on a high-speed train bound for Paris when, after a stop in Brussels, they heard what sounded like gunfire, according to Mr. Sadler’s sister, Arissa.