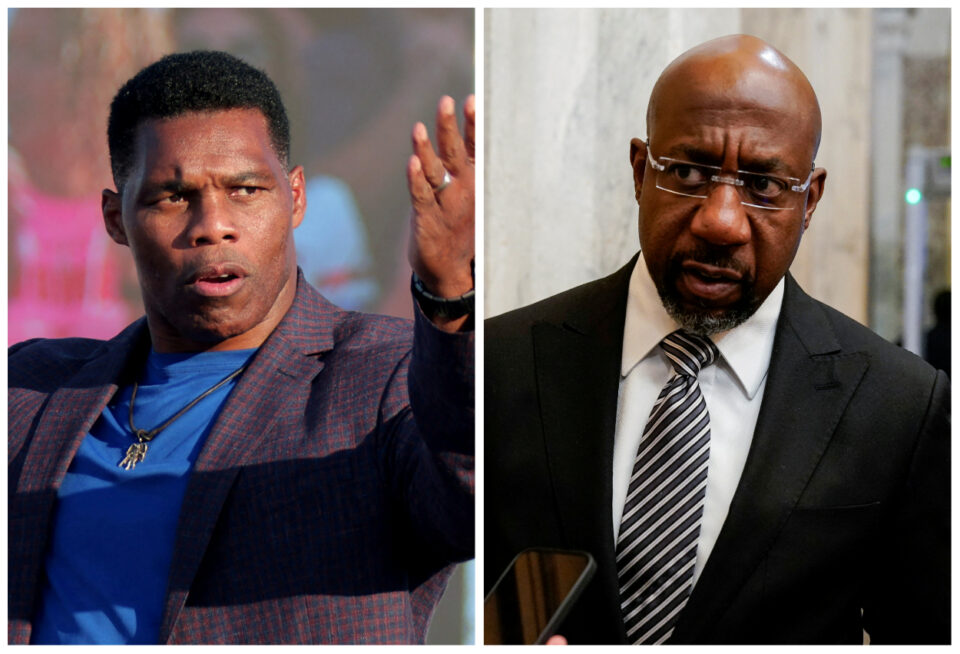 WASHINGTON (Reuters) -Democratic U.S. Senator Raphael Warnock and Republican challenger Herschel Walker sparred over a range of issues from abortion and policing to personal integrity on Friday, as a key Georgia contest that could help determine control of the Senate came to a head in a contentious televised debate.

Walker, a one-time football star and political novice backed by former President Donald Trump, sought to brand the incumbent as a rubber stamp for Democratic President Joe Biden’s agenda, which Republicans have painted as responsible for inflation, crime and other social ills.

“This race ain’t about me. It’s about what Raphael Warnock and Joe Biden have done to you and your family,” Walker said. “I’m here to fix it.”

Warnock, pastor at a historic Atlanta church who has served less than two years in the Senate, presented himself as a committed public servant who has worked to cap the price of insulin, control gun violence and protect rights.

Their showdown is one of the most closely watched contests in the Nov. 8 congressional elections.

During the hour-long debate in Savannah, Walker accused Warnock of attacking the police, empowering criminals and allowing the powerful painkiller fentanyl into Georgia by not protecting U.S. borders.

“We will see time and time again tonight, as we have already seen, that my opponent has a problem with the truth. And just because he says something doesn’t mean it’s true,” Warnock responded.

“One thing I have not done, I’ve never pretended to be a police officer and I’ve never threatened a shootout with the police,” he added in reference to media reports that Walker has falsely claimed to have worked in law enforcement and once talked about having a shootout with police.

Walker then flashed what appeared to be a badge and was admonished by a debate moderator for using a prop.

The Republican has acknowledged struggling in the past with mental health and was asked if he still receives treatment. “I continue to get help if I need it. But I don’t need any help. I’m doing well,” Walker said.

The race had already been rocked by media reports that Walker, who has voiced opposition to abortion without exceptions, paid for an abortion in 2009 to terminate the pregnancy of a woman he was dating and who later gave birth to one of his children. Walker has called the allegation a “flat-out lie.” Reuters has not independently confirmed the claim.

During the debate, Walker repeated his statement that the reports are false and reiterated his position on abortion: “I’m a Christian. I believe in life.”

Democrats hold slim majorities in the Senate and House of Representatives. Senate control could be decided by the outcome of races in Georgia, Arizona, Nevada, North Carolina, New Hampshire, Ohio, Pennsylvania and Wisconsin.

Warnock dodged a question about whether he would support Biden for a second term in 2024, saying: “I’ve not spent a minute thinking about what politicians should run for what in 2024.”

Walker said he would back Trump: “Yes, I would. And let me tell you, because President Trump is my friend.”

A recent opinion poll conducted by the University of Georgia showed Warnock leading Walker 46% to 43% among likely voters.

Walker has been known to make confusing statements on policy issues such as climate change, while Warnock is an eloquent speaker who is senior pastor at Atlanta’s Ebenezer Baptist Church, where slain civil rights leader Martin Luther King once preached.

Andra Gillespie, a political science professor at Emory University in Atlanta, said the debate was too inconclusive to make a difference in the race, with Walker demonstrating little more than a grasp of Republican talking points and Warnock failing to dominate the exchange.

If neither candidate gets more than 50% of the vote on Nov. 8, the race would be decided in a Dec. 6 run-off election.

Each candidate pledged to accept the outcome of the election.