HFR Conversations: Black Editors and Designers on Race and Fashion 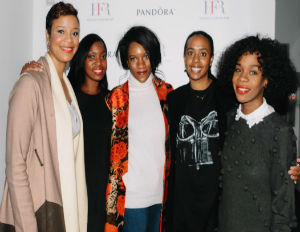 Each of the panelists started by sharing how they landed their dream jobs. Danielle Prescod’s route may have been the most tedious, as sheÂ compiled a spreadsheet of about 200 designers and magazines and e-mailed each one with hopesÂ of gettingÂ an internship. The now editor got a call back from Nylon and she was offered a position before she even left the interview.

The career women reminisced onÂ memories of their fondest moments—like when work took Nicole, Rajni and Shiona Turini of Cosmo across the seasÂ to Paris Fashion Week. But they also dished on the not so pleasant memories. Rajni remembered working at a small magazine and casting the two next big models, one happening to be Asian and the other African American. She was proud and eager to reveal the finished shoot, only to be told “This is not VIBE magazine!” by a displeased supervisor.

Nicole shared a similar experience while on the job at a much larger and more popularÂ mag. In an effort to make a photo shoot more diverse, she chose models with a variety of ethnic identities. One of the photographersÂ clearly didn’t value diversity as much as Nicole did and asked, “Why do I always have to shoot the black model?”

The panelistsÂ drew on their experiences, good and bad, to leave the audience with valuable insight. Azede, theÂ evident rebel and creative of the bunch, said the most important thing for aspiring designers andÂ editors is “having your vision and following that.” She emphasized that no matter what you’re faced with, you have to go full force and not focus on the negative. Prescod concluded by saying, “When you think you’re working your absolute hardest, work a little bitÂ harder.”

Check out some of the top Tweets from the event!

The Search for Americaâ€™s Next Black Comedians