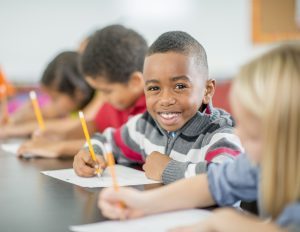 The Collaborative for Student Success, a nonprofit that supports high standards for all students, such as the Common Core State Standards, has reported that higher academic standards are leading to greater proficiency among students.

In spite of its many gains, the U.S. education system is nowhere near being high achieving, like, for example, Finland. There is much more work to be done, specifically in areas like teacher education, training, and support; equalizing funding so that rich districts don’t get more money than poor districts, along with adequate mental health counseling for students K-12, and providing high quality pre-K for all.

If Pasi Sahlberg had his way, we would also develop generous maternity and family leave policies, and address income inequality, which, if we had less, might reduce the need for mental health counseling.

But, it is heartening to learn that among the 40 states that adopted and maintained higher K-12 academic standards, most have seen increased proficiency rates.

What’s most exciting, “Among third-grade students–whose entire academic careers have been guided by high standards–math scores increased by more than three percentage points,â€ the Collaborative for Student Success reports.

“Success in this economy requires a higher level of training and skill development than ever,â€ Delaware’s Gov. Jack Markell remarked at a press event yesterday, with New Mexico’s Secretary of Education, Hanna Skandera, and the executive director of CSS, Jim Cowen.

Markell continued,”When given the chance, our students can rise to the challenge.â€

Skandera agreed that greater achievement in her state was “a result of establishing a higher bar, and our teachers and our students responding to that.â€

New Mexico and Delaware have both seen meaningful student achievement gains. “We have 12,000 more students on grade level this year,â€ Skandera said. Delaware also saw improvements; across every district and in nearly every grade, more students reached math and reading proficiency. 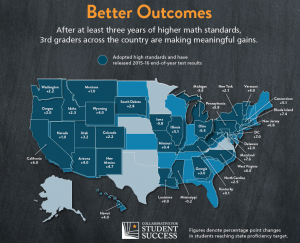 States are becoming more honest, as well. It’s sad to think that we live in a country where state leaders would mislead parents and children, but that’s what happened. When school leaders felt that standards were too high for certain populations, they simply lowered the standards, making it easier for those students to “passâ€ tests.

CSS has highlighted these so-called “honesty gaps” as a way to expose states and hold them accountable for how they communicate proficiency rates to the public. Now, CSS reports, states have become more transparent about student achievement.

Want to learn more about the power of higher standards? Watch the video below.