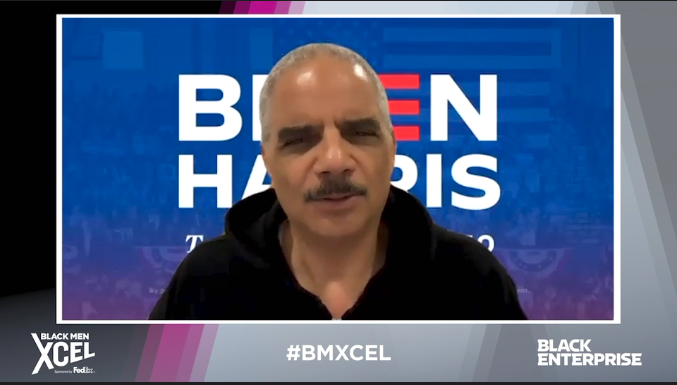 Thousands of participants joined BLACK ENTERPRISE for the 4th annual Black Men XCEL Summit, which featured a variety of sessions, workshops, coaching, and virtual activities designed to train, equip, develop, and inspire Black men across a broad array of endeavors.

Sponsored by FedEx Express, Black Men XCEL (BMX) was created to provide Black men with the tools and resources needed to advance in their respective careers and industries as well as acquire generational wealth and maintain mental wellbeing. Participants were also granted access to some of today’s most successful business leaders like Walker Co. & Brands founder and CEO Tristan Walker, athletes like former NFL player Tiki Barber, and executives like PayPal Head of Global Financial Compliance Investigations Art Taylor. Furthermore, the summit, which was also facilitated in partnership with presenting sponsors AT&T and JPMorgan Chase, provided attendees with the opportunity to conduct live chats with speakers, experts, and mentors.

“The motto for this year’s BMX is celebrating the best of who we are,” said BLACK ENTERPRISE President and CEO Earl “Butch” Graves Jr. in his opening remarks. “It is a celebration of Black men’s collective achievement, resolve, and resilience during one of the most challenging periods of our history. We meet under the cloud of COVID-19 and a crippled economy. We are nearing the end of a divisive, racially-charged election, and Black men are under assault at all levels.”

Walker Co. & Brands founder and CEO Tristan Walker kicked off the summit with a powerful session about how he built and positioned Walker Co. & Brands for its merger with Procter & Gamble. Walker, who went from a Twitter intern to serving on the corporate boards of Footlocker and Shake Shack, also opened up about how his company has grown amid COVID.

At another point during his session, he admitted that if his company would have likely run out of money if it was not acquired by Procter & Gamble in 2018.

Former NFL quarterback Michael Vick opened up about his road to redemption following his 21-month prison sentence in 2007 for his involvement in a dogfighting ring during a panel about empowering the next generation of Black men.

“When I came home from prison, I felt the pressure. I felt like I was living in a bubble,” admitted the FOX Sports analyst and activist about the notorious incident which overshadowed the rest his football career.

However, rather than succumbing to the pressure he felt, Vick says he used the tools he developed behind bars to help him persevere.

Vick added that now he uses the adversity he’s overcome as a teachable moment for younger Black men and women.

“I preach a hard message when talking to the youth in terms of responsibility, character, your beliefs, values, and morals,” said the NFL legend. “I try to explain to young men and women the hurt and the anguish that I’ve experienced to grow stronger and to get to where I am today. I want my message to be, at all cost, you’re not going to go through life perfect, there are going to be some ups and downs, but it’s all in how you persevere.”

Black Men and the Ballot

@EricHolder’s view of where we are in the election cycle as far as voting and what is at stake for African-Americans. #BMXCEL⁣ ⁣ Link in bio to register (complimentary) to the Black Men XCEL summit to watch the full discussion!

Former U.S. Attorney General Eric Holder stressed the importance of exercising the right to vote and overcoming voter suppression during his appearance. He also urged young people, in particular, to make their voices heard at the polls.

“For young people who are disillusioned or who don’t trust the system, take it from one who is a little older and has experienced a lot, your future is on the ballot. And the world that you want to live in is on the ballot,” Holder told BLACK ENTERPRISE SVP and Chief Content Officer Derek T. Dingle. “If you want to shape that world, you have to participate in that process by voting on November 3. But then you have to continue to be involved in a civic way and do the things that people before have done. Fight for not only your generation but for generations that will come after you.”

⁣ Many athletes struggle to sustain their wealth and knowing that, Tiki Barber’s mother introduced him and his brother to the world of financial advising at a very young age. #BMXCEL⁣ ⁣ Head to BMX.blackenterprise.com to register for the Black Men XCEL Summit to watch the full panel sponsored by @jpmorgan

In a panel sponsored by JP Morgan Chase, Barber, the former NFL running back who spent 10 seasons with the New York Giants and the co-founder of Thuzio, shared one of the biggest financial mistakes he made during his career.

“The worst mistake I made personally was I bought a very expensive apartment on the Upper East Side of Manhattan. It was over $6 million. I had been around for a very long time, but the timing was wrong in the market. And I didn’t look at the market. I didn’t look at the economic trends,” he admitted. “And we know what happened in 2008, the world corrected itself.”

Not only did he lose money on his property, but he then went through a divorce two years later. “Everything started compounding,” he added. “Timing absolutely matters when you’re making large purchases like that.”